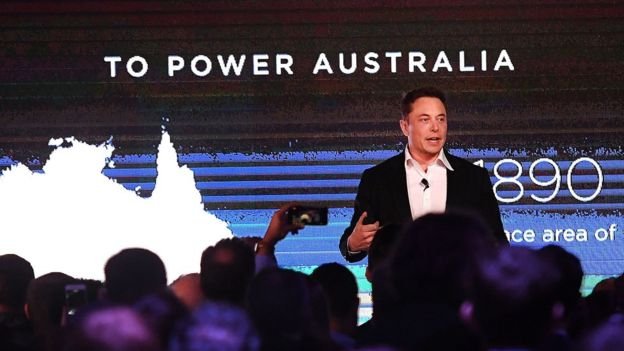 The 100-megawatt battery, built by Tesla, was officially activated on Friday. It had in fact provided some power since Thursday due to demand caused by local hot weather.

South Australia has been crippled by electricity problems in recent times.

Tesla boss Elon Musk famously vowed to build the battery within 100 days – a promise that was fulfilled.

In a Twitter exchange in March, an Australian software entrepreneur asked Mr Musk if he was serious about helping South Australia after it suffered a statewide blackout.

Mr Musk said he was – and if the battery wasn’t built within 100 days, South Australia would receive it for free.

The countdown began on 30 September after approval from regulators. Tesla finished the battery in about 60 days.

The renewable power plant is located in Jamestown, about 200km (125 miles) north of Adelaide, and connected to a wind farm run by French energy company Neoen.

It can power up to 30,000 homes for an hour on its own, but will more likely be used to support and stabilise existing electricity supplies.

Mr Musk has described it as three times more powerful than the world’s next biggest battery.

“It will completely transform the way in which renewable energy is stored, and also stabilise the South Australian network as well as putting downward pressure on prices,” South Australian Premier Jay Weatherill said in July.

Tesla has been expanding its battery business alongside its car production.