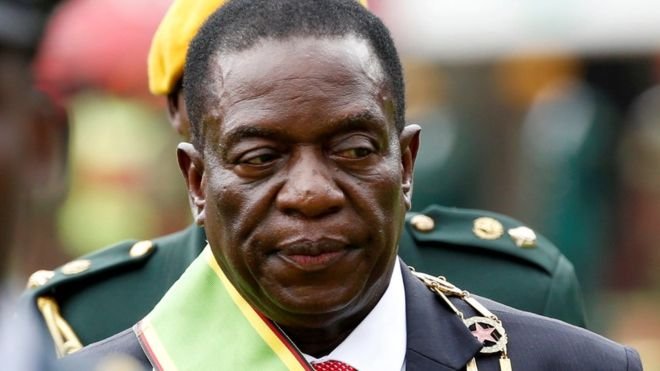 Mr Mnangagwa has made Sibusiso Moyo, the general who appeared on state TV after the recent military takeover, the new foreign minister.

The head of Zimbabwe’s air force, Perence Shiri, was named the minister of agriculture and land affairs.

Mr Mnangagwa was sworn in last week after Robert Mugabe agreed to resign.

The man who ruled Zimbabwe for 37 years stepped down after the military intervened following the sacking of Mr Mnangagwa as vice-president.

While the new president has chosen to keep many of Mr Mugabe’s former cabinet ministers in office, Mr Mnangagwa has also awarded positions to military leaders who have previously supported him.

Aside from Mr Moyo and Mr Shiri, leaders of the powerful war veterans’ association, who pushed for Mr Mugabe to go after the military intervention, also got cabinet jobs.

Chris Mutsvangwa, who heads the group, is now in charge at the information ministry.

The appointments led government critic Tendai Biti to suggest that Zimbabweans were “wrong” to have hoped for change.

Perence Shiri is a figure notorious for having led the military operation against opponents of Mr Mugabe in Matabeleland in the early 1980s.

The operation resulted in the killing of an estimated 20,000 civilians.

Mr Mnangagwa – who had fled Zimbabwe earlier this month only to return to a hero’s welcome – has for decades been part of the country’s ruling elite.

His dismissal as vice-president – after he was accused of plotting to take power – led the ruling party and the army to intervene.

The military denied it that was staging a coup and maintained that it was acting against “criminals” surrounding Mr Mugabe.

It came after a power struggle over who might replace the president, with Mr Mnangagwa and Mr Mugabe’s wife, Grace, on opposite sides.

Despite pledging a “new destiny” for Zimbabwe, Mr Mnangagwa is still associated by many with some of the worst atrocities committed under the ruling Zanu-PF party since the country gained independence in 1980.