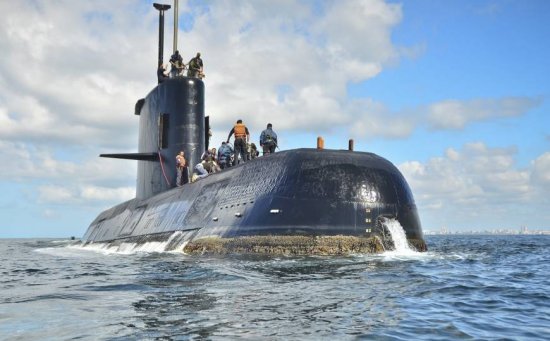 Argentina has called off the rescue operation for its missing submarine 15 days after a reported explosion apparently sent it to the bottom of the Atlantic ocean off the coast of Patagonia.

“No one will be rescued,” said navy captain Enrique Balbi, who has been acting as official spokesperson for the rescue effort. Nonetheless, the search operation for the ARA San Juan would continue in waters of up to 500 metres deep, he added.

“Despite the magnitude of the effort made it has not been possible to locate the submarine,” said Balbi, referring to the multinational response that has included US, British and Russian aircraft, ships and personnel.

The submarine had 44 people on board. Luis Taglapietra, whose son Damiلn was a 27-year-old trainee on the submarine, told the TN news channel: “This is perverse and impossible to understand. They’re playing word games,” referring to the navy announcing it was calling off rescue efforts while agreeing to continue searching for the submarine as long as it is not in too deep waters. “What they are really saying is that they’re not going to be looking for it any more.”

The San Juan went missing on 15 November when it lost radio contact with the naval base in Mar del Plata, but it was not until two days later that the navy announced publicly that the submarine had gone missing.

“More than double the number of days than it would have been possible to rescue the crew have passed,” Balbi told reporters.