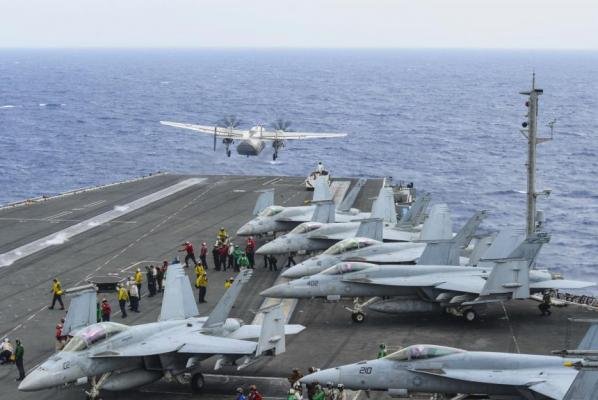 A U.S. Navy aircraft with 11 people on board crashed into the Philippine Sea off Japan on Wednesday, authorities said.

The C2-A “Greyhound” crashed about 500 nautical miles southeast of Okinawa Wednesday afternoon, on its way to the USS Ronald Reagan from Marine Corps Air Station Iwakuni.

The Navy said the C2-A, a high-wing transport aircraft, was conducting a routine flight with passengers and cargo when it crashed.

Navy officials said 8 people were rescued and in “good condition.” They were transferred to the USS Ronald Reagan for medical evaluation.

Navy and Japan Maritime Self-Defense forces are looking for the remaining three.

The Reagan was participating in a drill with Japanese forces, but it’s unclear whether the aircraft carrier was also searching for the missing passengers.

The @USNavy is conducting search and rescue following aircraft crash. We are monitoring the situation. Prayers for all involved. https://t.co/1AxmegKqvu

The C2-A is assigned to the “Providers” of Fleet Logistics Support Squadron Three Zero, Detachment Five, forward deployed in NAF Atsugi, Japan, the Navy said. Its mission includes transporting “high-priority” cargo, mail, duty passengers and visitors between the Reagan and shore bases in the west Pacific and Southeast Asia.

The cause is under investigation, but Japanese Defense Minister Itsunori Onodera told reporters Wednesday that engine trouble may have been a factor.

Grumman introduced the propeller-driven C2-A “Greyhound” for Navy use in 1966.