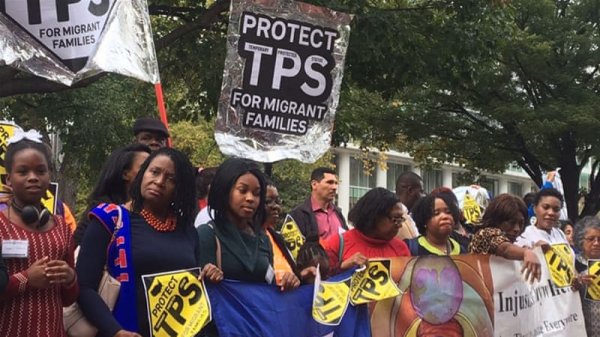 The Haitian community in the US is “shocked” and “speechless” after President Donald Trump’s administration announced that it was ending its humanitarian protection for Haiti.

The move, announced on Monday, gives nearly 60,000 Haitians, who hold Temporary Protected Status (TPS), 18 months to return to Haiti or find other ways to legalise their status in the US.

“I have 18 months to get my life together … to try to navigate my life as an undocumented immigrant,” Lys Isma, a 22-year-old Haitian living in Miami, Florida told Al Jazeera.

Isma is one of about 55,000 Haitians who has received TPS since Haiti was given the humanitarian protections after an earthquake in 2010 ravaged the country, killing 316,000 and displacing more than 1.5 million.

“I have no memories of Haiti,” said Isma, who first arrived in the US when she was nine months.

“A lot of my life is going to be taken away,” she said. “I am overwhelmed.”

Isma said her future in the US is now unclear after the Department of Homeland Security announced that it was terminating TPS for Haiti.

The department said in a memo late on Monday that it was ending the humanitarian protection for the country after “a review of the conditions upon which the country’s original designation were based and whether those extraordinary, but temporary conditions prevented Haiti from adequately handling the return of their nationals”.

The memo said that Acting Secretary Elaine Duke “determined that those extraordinary, but temporary conditions caused by the 2010 earthquake no longer exist”.

The department added the protections for Haitians will end in July 2019.

Not ready to received all these families

Despite the department’s assessment, supporters of the Haitian community in the US say Haiti, the poorest country in the Western Hemisphere, is not ready to take back 55,000 immigrants as the country continues to face political and security uncertainty.

A UN report from earlier this year found that 2.5 million Haitians were still in need of humanitarian aid. The unstable recovery was exacerbated by Hurricane Matthew in 2016, according to the UN. The report also notes that there has been a resurgence of sicknesses like diarrhea and cholera.

The health and infrastructure challenges, were echoed by the US Department of State in September of 2017, when it issued a travel warning for Haiti.

“The Department of State warns US citizens to carefully consider the risks of travelling to Haiti due to its current security environment and lack of adequate medical facilities and response,” the state department said in the warning, which remains in effect.

Haiti’s capital, Port-au-Prince, has recently been rocked by anti-government protests.

Ketlie Chrispin, a representative for Haitian Americans United for Change (HANC), a New York-based group advocating for Haitian TPS recipients, said she was shocked by the news.

“Haiti is not ready to receive all of these families,” Chrispin told Al Jazeera as she spent Monday evening fielding calls for community members worried about their next steps.

“I am speechless,” she said, adding that the decision “is separating families”.

A study by the Center for Migration Studies found that TPS holders from Haiti, Honduras and El Salvador together have more than 273,000 US-born children.

“This administration says families mean everything to them,” Chrispin said.

“But when they say that, they are not thinking about our families. Not all families mean everything to them.”

Haiti is not an option

Chrispin and other members of HANC told Al Jazeera that they will dedicate the next few weeks to explore what other place will open their door.

“We have no concrete place to go. Haiti is not an option. Moving to Canada is on the table for many families,” Chrispin said.

In addition to developing an 18 month transition plan before the termination of status on July 22, 2019, Haitian TPS holders are required to pay nearly $600 and re-apply for a Work Authorization Documents in order to legally work in the United States for the remaining period.

This will be the second time this year that Haitian TPS recipients must apply for work authorisation.

In May after pressure from Congresswoman Yvette Clarke, and community groups, Haiti was granted six additional months for review before termination.

At that time, then-Secretary John Kelly stated that, “he believed there were indications that Haiti – if its recovery from the 2010 earthquake continued at pace – may not warrant further TPS extension past January 2018”.

The administration also announced that it was deferring its decision on whether to renew the protected status for Hondurans, temporarily extending the programme for another six month and leaving more than 57,000 people in limbo.

Back in Miami, Florida, Lys Isma reflected on the changes that her community is now facing.

“I want my community to stay strong, she said.

“One of the great things about my community is our resilience,” she added.