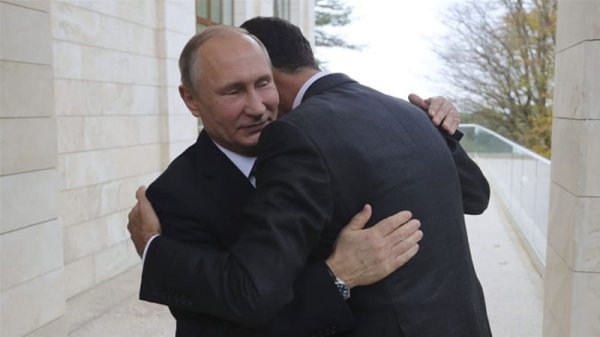 Syrian President Bashar al-Assad thanked his Russian counterpart, Vladimir Putin, for “saving” his country and for Russia’s support in Syria.

The two heads of state met for talks in the Russian Black Sea resort of Sochi on Monday, the Kremlin said in a statement on Tuesday.

They discussed the fight against “terrorism” and the possibilities for a political settlement in Syria, which has entered its seventh year of war. The statement added that Assad had expressed his readiness to hold discussions with parties interested in resolving the conflict.

According to the RIA news agency, which cited Kremlin spokesperson Dmitry Peskov, the meeting lasted for about four hours.

The visit was believed to be only the second time al-Assad has left Syria since the war broke out in 2011.

In October 2015, a month after Russia began its campaign in Syria, Assad and Putin convened in Moscow.

Russia, the Syrian government’s main ally in the war, has been supporting government forces against what has become a proxy war in the region.

Several international initiatives to end the war have commenced over the years, including an attempt at establishing four “de-escalation zones” across the country, with Russia, Turkey and Iran acting as guarantors.

To date, some 465,000 people have died in the conflict, and more than 12 million Syrians have been displaced.

80 people killed in Syria in just over 24 hours