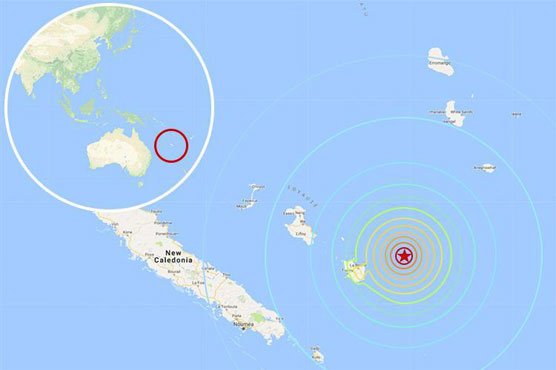 A powerful 7.0-magnitude earthquake struck off the eastern coast of New Caledonia on Monday, triggering a brief tsunami warning and evacuation alert but causing no significant damage, local officials said.

The US Geological Survey said the shallow tremor hit approximately 82 kilometres east of the lightly populated Loyalty Islands at around 09:45 am (2245 GMT).

The Pacific Tsunami Warning Center initially issued an alert saying areas within 300 kilometres (180 miles) could be affected, including Vanuatu and New Caledonia, whose capital Noumea sits some 250 kilometres east of the epicentre.

It said that tsunami waves had been “observed” but gave no location or further detail.

Sirens sounded briefly along coastal areas of the Loyalty Islands with some residents told to evacuate. However, after an hour they were advised to resume normal activities but to remain vigilant for aftershocks.

There have been no immediate reports of damage.

Pierre Lebellegard, a seismologist for the French Research Institute for Development, told AFP the Loyalty Islands had been seismically active for the past three weeks.

“They must be very frightened in Mare,” he told AFP, referring to the main island where over 5,600 people live.

He added that such quake clusters “happen every 10 to 15 years” in the area.

Nervous residents reported feeling several tremors throughout the night before the quake hit.

“Parked cars were shaking and everyone went outside,” one official from Mare told AFP.

“I thought I was going to faint, I was very afraid and I rushed out of my building,” said a resident of central Noumea.

“They will feel moderate shaking, but there is a low likelihood of damage from the earthquake itself in Noumea,” he told AFP.

Monday’s earthquake followed a series of temblors to hit the Loyalty Islands area over the past few weeks, including a 6.8-magnitude quake that struck at the end of October.

New Caledonia, a French overseas territory, is part of the “Ring of Fire”, a zone of tectonic activity around the Pacific that is subject to frequent earthquakes and volcanic eruptions.