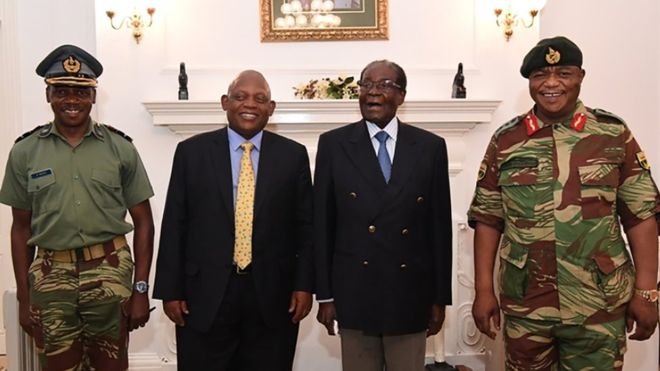 Zimbabwe’s long-time President Robert Mugabe is reportedly refusing to step down immediately, despite growing calls for his resignation.

The 93-year-old was put under house arrest during a military takeover on Wednesday, amid a power struggle over who would succeed him.

The military said on Friday it was “engaging” with Mr Mugabe.

It also said progress had been made in targeting “criminals” around the president, but did not elaborate.

Several senior officials are said to have been detained since Wednesday.

In a televised statement, the military said it would advise the nation on the outcome of talks with Mr Mugabe “as soon as possible”.

President Mugabe held talks on Thursday with regional envoys and the army chief. Sources say he has so far refused to agree to move aside.

Opposition leader Morgan Tsvangirai said earlier it was “in the interests of the people” that Mr Mugabe “resign… immediately”.

The army moved in after Mr Mugabe last week sacked Vice-President Emmerson Mnangagwa, signalling that he favoured his wife Grace Mugabe to take over his Zanu-PF party and thus the presidency.

The BBC’s Andrew Harding, in Zimbabwe, says that if President Mugabe can be persuaded to step down officially it could help legitimise the military’s dramatic intervention.

On the streets, it is hard to find anyone who wants Mr Mugabe to stay on, our correspondent adds, but negotiating the manner of his departure and some sort of transitional agreement to follow could take some time.