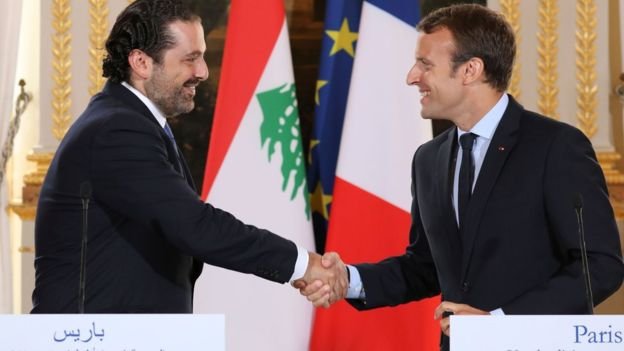 French President Emmanuel Macron has invited Lebanese PM Saad Hariri and his family to France, but said he was not offering political exile.

Mr Hariri resigned unexpectedly during a visit to Saudi Arabia on 4 November, sparking a political crisis.

The Saudi government has denied holding him against his will or pressing him to resign in an attempt to curb the influence of its regional rival, Iran.

However, Mr Hariri has insisted that he is fine and will soon return to Lebanon.

Mr Macron, speaking on a trip to Germany, said the invitation to visit France “for a few days” was made after he spoke to both Mr Hariri and Saudi Crown Prince Mohammed bin Salman by telephone.

Asked if he was offering Mr Hariri exile, he replied: “No, not at all. I hope that Lebanon will be stable, and that political choices should be in accordance with institutional rule.”

He added: “We need a strong Lebanon with her territorial integrity respected. We need leaders who are free to make their own choices and speak freely.”

President Aoun, in comments on Twitter, said Lebanon considered Mr Hariri “held and detained” in violation of his human rights.

“No decision can be made on a resignation from abroad,” he added. “He should return to Lebanon to present his resignation or withdraw it, or to discuss the reasons for it and how to address them.”

In response, Mr Hariri tweeted: “I want to repeat and affirm that I am perfectly fine and I will return, God willing, to dear Lebanon as I promised you, you’ll see.”

A member of Mr Hariri’s political party, the Future Movement, told Reuters news agency that the prime minister and his family were not being detained.

Mr Hariri announced his resignation in a televised address from the Saudi capital, Riyadh, saying he feared there was an assassination plot against him.

He accused Iran of sowing “discord, devastation and destruction” in the region.

Mr Hariri’s father Rafik, himself a former Lebanese prime minister, was killed in a suicide bombing in Beirut in 2005.

Several members of the Shia Islamist Hezbollah movement, which is backed by Iran, are being tried in absentia at a UN-backed tribunal at The Hague in connection with the attack.

The group has denied any involvement.