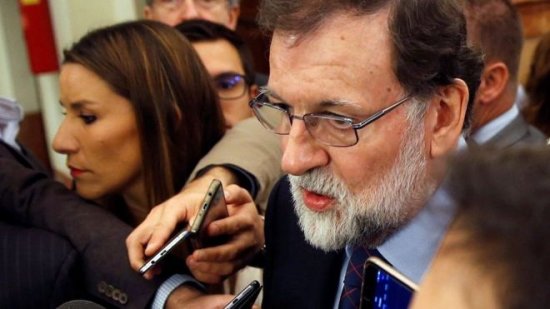 Spanish Prime Minister Mariano Rajoy will visit Catalonia for the first time since he imposed direct rule on the north-eastern region a fortnight ago.

He has called regional elections for December and will address a campaign meeting of his centre-right party.

Some 750,000 people protested in Barcelona on Saturday night against the detention of Catalan leaders.

Several figures were held after the Catalan government made a unilateral declaration of independence.

The crisis was sparked by a disputed referendum held in Catalonia in October, which had been barred by the Spanish courts.

Catalan officials said the independence campaign won 92% of the vote, from a turnout of 43%. Many of those who were against independence did not cast votes, refusing to recognise the legitimacy of the referendum.

The Spanish government responded to the referendum by dissolving the Catalan parliament, imposing direct rule, and calling a snap regional election on 21 December.

Since the crackdown by Madrid, Catalonia’s sacked President Carles Puigdemont has gone into self-imposed exile in Belgium, and his top allies have been prosecuted.

A lawyer whose firm represents two of his imprisoned former ministers told BBC News that their situation had been made worse by Mr Puigdemont’s decision to flee.

Protesters in Barcelona on Saturday shone phone torches in unison at sunset, as calls were made to free eight Catalan ministers and two grassroots campaign leaders.

They marched behind a banner declaring “We are a republic”, and carried placards that said the 10 Catalan detainees were political prisoners.

The sacked former ministers are being investigated for alleged rebellion and sedition, while the two activists were arrested over a mass protest before the referendum.

There were performances and speeches to the crowd. Protesters chanted “Puigdemont for president” and a cellist played a traditional Christmas carol, The Song of the Birds, which is associated with Catalans driven into political exile.

The left-wing ERC party, a key ally of Mr Puigdemont, has announced that some of the prisoners, including party leader Oriol Junqueras, as well as some of the sacked ministers who also went to Belgium, will stand on its electoral list.

However, the ERC has rejected a call from Mr Puigdemont to fight the election as part of a single pro-independence bloc with other parties – as they did in 2015.

A recent opinion poll in Catalan newspaper La Vanguardia suggests that the ERC will win the biggest share of the vote in December.

In another development, the mayor of Barcelona, Ada Colau, condemned Catalonia’s pro-independence leaders.

Ms Colau, who was elected in 2015 on an anti-capitalist platform and whose party is standing in the regional parliamentary election for the first time, said leaders of the independence movement had “tricked the population for their own interests”.

“They’ve provoked tensions and carried out a unilateral independence declaration which the majority do not want,” she told a meeting of her Catalonia in Common party.

Britain Could Be Smoke-Free By 2040