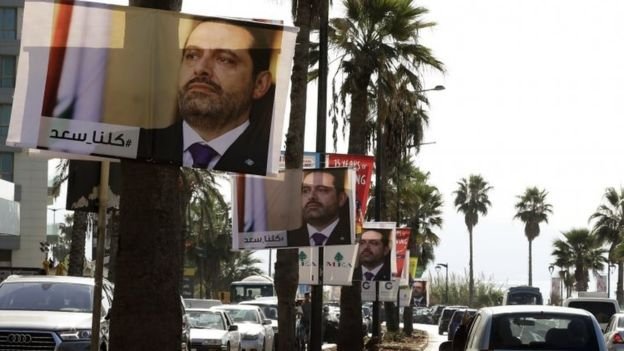 The Lebanese president has asked Saudi Arabia to clarify the situation of Prime Minister Saad Hariri, who announced his resignation in Riyadh.

Michel Aoun has not accepted the shock resignation of a week ago, suggesting words attributed to Mr Hariri should be treated with caution.

The US has warned other countries not to use Lebanon for proxy conflicts.

There is growing concern that Lebanon is becoming drawn into spiralling sectarian tensions between the region’s biggest Shia Muslim power, Iran, and Saudi Arabia, which is mainly Sunni Muslim.

Mr Hariri, a Sunni leader and businessman, was nominated to form Lebanon’s government by Mr Aoun in November 2016.

The announcement of his resignation on 4 November sent shockwaves through the region.

“The obscurity surrounding the condition of Prime Minister Saad Hariri since his resignation a week ago means that all positions and actions declared by him or attributed to him do not reflect the truth,” President Aoun said.

An unnamed senior Lebanese official, quoted by Reuters news agency, said President Aoun had told a group of foreign ambassadors on Friday that Mr Hariri had been “kidnapped” and should have immunity.

However, the remarks have not been officially confirmed. French Foreign Minister Yves Le Drian said on Friday that “we think he’s free to move and he has to make his own choices”.

In his televised remarks from Riyadh a week ago, Mr Hariri said that he was stepping down because of an unspecified threat to his life.

He accused Iran and Hezbollah, a Shia group, of taking over Lebanon and destabilising the wider region.

He has not spoken publicly since then.

On Friday, US Secretary of State Rex Tillerson said he had received assurances that Mr Hariri was free and he encouraged him to return to Lebanon.

He expressed concern about how the crisis might affect the stability of Lebanon’s fragile coalition, and warned countries in the region against using Lebanon as a “venue for proxy conflicts”.

The international community has also weighed in on Mr Hariri’s absence, with UN Secretary General Antonio Guterres warning that a new conflict in the region would have “devastating consequences”.

On Thursday, French President Emmanuel Macron paid an unscheduled visit to Saudi Arabia, to emphasise to Saudi leaders the importance of stability in Lebanon. He spoke to Mr Aoun by phone on Saturday.

France has historical ties with Lebanon, as the former mandate power before independence.

Saudi Arabia and its Gulf allies ordered their citizens in Lebanon on Thursday to leave the country immediately.

Riyadh accused Iran of “direct military aggression”, saying it had supplied a missile which it says was fired by Hezbollah at Riyadh from Yemen the same day as Mr Hariri’s resignation.

Iran dismissed the Saudi allegations as “false and dangerous”.