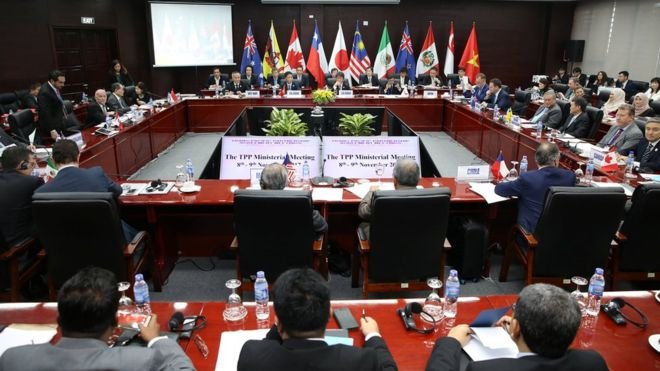 Members of the Trans-Pacific Partnership have agreed a new framework to revive the proposed trade deal, following US withdrawal earlier this year.

Meeting on the sidelines the Apec summit in Vietnam, the remaining eleven nations released a joint statement saying they were committed to free and open trade.

Canada had been accused of stalling.

However its trade minister said good progress has now been made.

François-Philippe Champagne also denied that Prime Minister Justin Trudeau had deliberately skipped a leaders’ meeting on the TPP on Friday and blamed his no-show on a scheduling mix-up.

“There was never an intention not to show up at any meeting,” he said.

Mr Trudeau said earlier in the week that Canada would not be rushed into a renewed TPP deal.

The country’s delegation said labour and environmental rights would be crucial pillars of a new agreement, but added that a lot of work still needs to be done.

Canadian officials said Canada was not the only country that wanted more time to work through the agreement.

The other countries working towards an agreement are Australia, Chile, New Zealand, Brunei, Singapore, Japan, Malaysia, Mexico, Peru and Vietnam.

However, analysts say the trade pact is less appealing to some nations without access to the huge US market.

President Donald Trump withdrew the US from the original 12-nation TPP agreement in January.

The bid to revive the TPP, which would have covered 40% of the global economy, was led by trade ministers from Japan, Australia and New Zealand.

Related Topics:ApecCanadaNorth America
Up Next