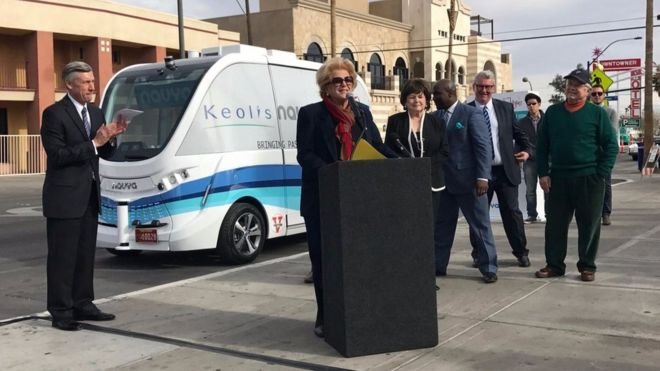 A self-driving shuttle bus in Las Vegas was involved in a crash on its first day of service.

The vehicle – carrying “several” passengers – collided with a lorry driving at slow speed.

Nobody was injured in the incident which city officials say was the fault of the human driver of the lorry. The man was subsequently given a ticket by police.

The shuttle is the first of its kind to be used on public roads in the US.

The collision comes a day after Waymo – owned by Google’s parent company Alphabet – announced it is launching a fully self-driving fleet of taxis in Phoenix, Arizona.

The Las Vegas shuttle, designed to ferry passengers to the famous strip, uses a system developed by Navya, a French company also testing its technology in London.

The shuttle carries up to 15 people and has a maximum speed of 45km/h, but typically travels at around 25km/h.

A spokesman for the City of Las Vegas told the BBC the crash was a “fender bender” – a minor collision – and that the shuttle would likely be back out on the road on Thursday after some routine diagnostics tests.

“A delivery truck was coming out of an alley,” public information officer Jace Radke said.

“The shuttle did what it was supposed to do and stopped. Unfortunately the human element, the driver of the truck, didn’t stop.”

Self-driving technology has been involved in crashes before, but almost all reported incidents have been due to human error.

Earlier this year an autonomous vehicle being tested by ride-sharing company Uber in Arizona rolled over after another driver on the road failed to give way.

An incident involving a Tesla Model S, which has some autonomous functions, killed a man in 2016. An investigation ruled that computer failings were partly to blame. Tesla was instructed to make the limitations of its technology clearer to drivers.

“Waiting for highly autonomous vehicles that are many times safer than human drivers misses opportunities to save lives,” the report said.

“It is the very definition of allowing perfect to be the enemy of good.”

Trump – Putin and I had good discussions