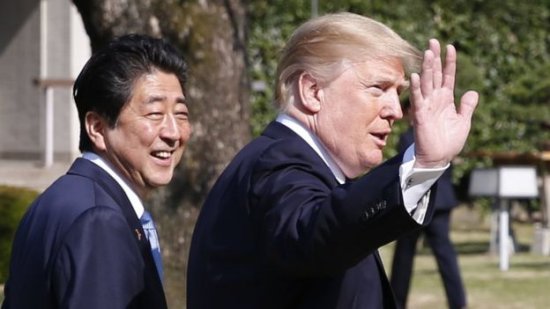 US President Donald Trump has lashed out at Japan over trade and said he would push for a fairer economic relationship between the two countries.

Speaking to business leaders in Tokyo on Monday he said Japan “has been winning” on trade in recent decades.

He also called on Japan to build more cars in America, a claim at odds with industry data on manufacturing.

Mr Trump’s comments come at the start of a 12-day Asian tour expected to be dominated by North Korea and trade.

The US leader said his country had “suffered massive trade deficits at the hands of Japan for many, many years”.

“We want free and reciprocal trade but right now our trade with Japan is not free and it’s not reciprocal and I know it will be and we’ve started the process,” Mr Trump told the group of US and Japanese executives.

He praised Japan, which counts the US as its second largest trade partner after China, for buying American military hardware.

Mr Trump also said he wanted his country to be the most attractive place to hire and invest.

Japan had a $69bn trade surplus with the US in 2016, according to the US Treasury department.

The countries are working on a new roadmap for trade after Mr Trump walked away from a regional free trade pact shortly after taking office.

The remaining 11 nations to the Trans Pacific Trade partnership are proceeding with negotiations on the agreement without the United States.

“Try building your cars in the United States instead of shipping them over. That’s not too much to ask,” the US president said at the briefing, adding, “is that rude to ask”?

But data from the Japan Automobile Manufacturers Association, a non-profit trade group, shows that a large proportion of its cars are built in the US.

In 2016, three-quarters of Japanese branded cars sold in the US were manufactured in North America, it said.

Last year those automakers built nearly 4m vehicles and 4.7m engines in the US.

They contributed $45.6bn in total investment through 24 manufacturing plants, and 43 research and development and design centres in the US.

Related Topics:Donald TrumpJapan tradeU.S
Up Next