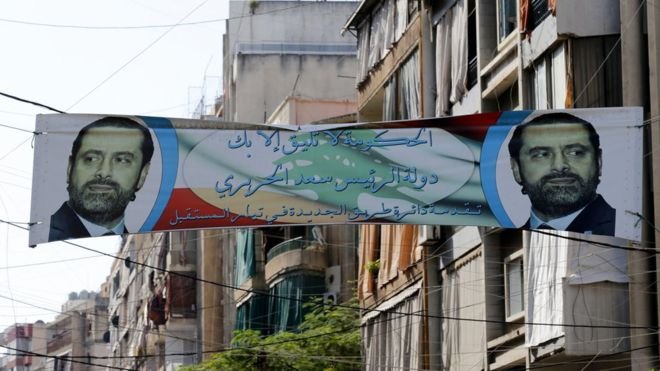 The leader of Shia group Hezbollah has said that Saudi Arabia forced the Lebanese prime minister to resign.

Saad al-Hariri stepped down in a televised broadcast from Saudi Arabia on Saturday, denouncing Hezbollah and its Iranian backers, and saying he feared for his life.

But the chief of Hezbollah, Hassan Nasrallah, said it was a Saudi decision “imposed” on him.

Saudi officials have denied this.

“It was not his intention, not his wish and not his decision to quit,” Sheikh Nasrallah said in a televised address.

He questioned whether Mr Hariri would be able to return from Saudi Arabia, but also called for calm, amid fears that violence could erupt in Lebanon.

Separately, despite Mr Hariri saying he feared assassination, the Lebanese army says it has not discovered any assassination plots in the country.

In addition to the army, Major General Abbas Ibrahim, the head of Lebanon’s General Security intelligence agency, has also said he has no information about any plots to kill politicians in Lebanon, Reuters news agency reports.

The Lebanese Internal Security Forces, meanwhile, have denied reports that they foiled a recent assassination attempt in Beirut, Lebanon’s capital.

However Saudi Gulf Affairs Minister Thamer al-Sabhan has said Mr Hariri’s bodyguards had confirmed that there was an assassination plot against him.

He also denied in an interview with a Lebanese TV station that Saudi Arabia pushed Mr Hariri to resign.

As he resigned on Saturday, Mr Hariri blamed Iran for meddling in several countries, including Lebanon, and said he felt the climate was similar to that which “prevailed” before his father, former Prime Minister Rafik al-Hariri, was killed by a bomb in 2005.

The attack was widely blamed on Hezbollah, which wields considerable power in Lebanon but denies it was involved.

Iran has denounced Mr Hariri’s assertions, with an adviser to the Supreme Leader accusing the US and Saudi Arabia of being behind the move.

The ex-PM is close to Saudi Arabia, Iran’s chief rival for regional influence.

Correspondents say Mr Hariri’s sudden departure has plunged Lebanon into a new political crisis and raised fears that it may be at the forefront of the regional rivalry between Shia power Iran and Sunni stronghold Saudi Arabia.

Mr Hariri became prime minister in December 2016, after previously holding the position between 2009 and 2011.

He has made several recent visits to Saudi Arabia. His announcement on Saturday came a day after a meeting in Beirut with Ali Akbar Velayati, an adviser to Iran’s Supreme Leader, Ayatollah Ali Khamenei.

The coalition government he led brought together almost all of the main political parties in Lebanon, including Hezbollah.