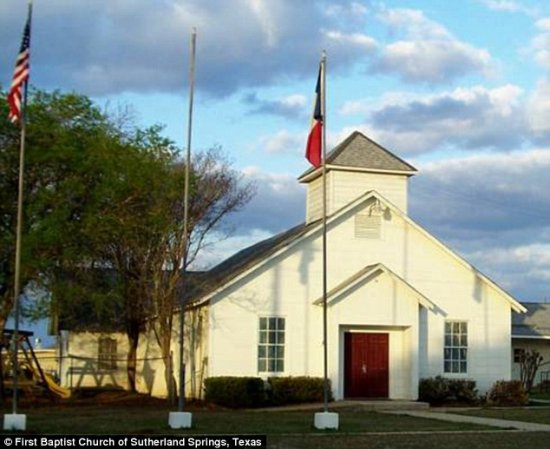 At least 16 people have been shot inside a Texas church after a gunman opened fire during the Sunday morning service.

The shooting happened at the First Baptist Church of Sutherland Springs, where around 50 people usually attend service, according to local reports.

Sheriff Joe Tackitt confirmed with KENS 5 that there are ‘multiple casualties and fatalities’.

Witnesses said a man ‘in full gear’ walked inside the church and opened fire just before 11.30am.

Police could not give an exact number of victims shot in the attack, but witnesses said as many as 20 shots were fired.The suspect, who has not been identified, is dead and there is no longer an active shooter threat, according to police.

Neighbors in the area said they may have heard the shooter reload multiple times. Another witness at the scene said a two-year-old was also shot in the attack.

Families tearfully prayed nearby as they wait to see if their family and friends are safe.

According to KSAT, there were at least six helicopters called in to transport victims to the hospital.

It’s unclear if anyone was fatally wounded in the attack.

Related Topics:First Baptist ChurchTrendingU.S
Up Next