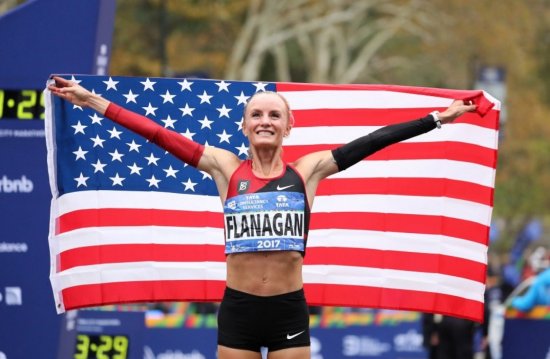 An emotional and exuberant Shalane Flanagan came to the finish line of the New York City Marathon and enveloped herself in an American flag, the magnitude of what she had accomplished bringing her to tears and to her knees.

Flanagan became the first American woman since Miki Gorman won the second of her back to back NYC marathons in 1977 to win the race, finishing in an unofficial time of 2:26:53. Flanagan, 36, is the American record holder in the indoor 3,000 meters, the indoor 5,000 and won a bronze medal that was upgraded to silver in the 10,000 in the 2008 Olympics. She finished sixth in the Rio Olympics marathon.

Flanagan previously finished second in the 2010 NYC Marathon, her first marathon, but had not run it since then. A fracture kept the Massachusetts native out of the Boston Marathon, so Flanagan put Keitany and New York atop her goals. ined hard for New York with an eye on Keitany, whom she had called “the alpha racer.”

On the men’s side, Geoffrey Kamworwor was the winner in an unofficial time of 2:10:53, three minutes faster than Wilson Kipsang in a race that marked the 26th and final marathon as a professional for Meb Keflezighi. Now 42, the man whose bib says simply “Meb,” won the NYC marathon in 2009 and the Boston Marathon in 2014 and finished 11th Sunday in 2:15:29.

The wheelchair division was a sweep for Swiss athletes, with Manuela Schar and Marcel Eric Hug winning.

Among celebrities in the race, Kevin Hart had the best request. “If I come through here with a weird face, don’t meme me to death, all right? I don’t want to see a bunch of memes of me looking bad out here. Just know I’m giving it my all.”

Security for the 26.2-mile race through New York’s boroughs was especially tight this year, coming just days after a terrorist attack on a lower Manhattan, the deadliest in the city since the Sept. 11, 2001 World Trade Center attacks.