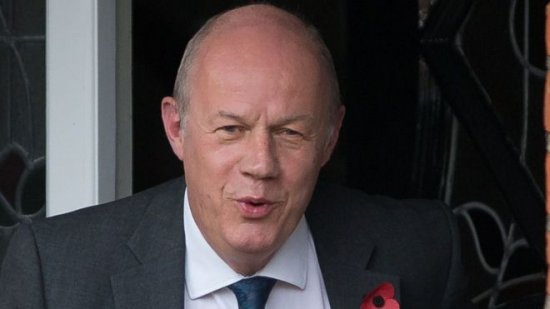 Theresa May’s most senior minister has denied a claim that police found pornography on his computer during a raid on his Westminster office in 2008.

And he said police had never told him that any improper material had been found on his parliamentary computer.

Mr Quick said he “stood” by the claim and would take part in an inquiry.

The revelations are the latest in a growing sexual misconduct scandal in Westminster.

On Sunday, further details emerged about allegations against Sir Michael Fallon, who this week resigned as defence secretary over his behaviour.

The Observer reported that he quit shortly after journalist Jane Merrick told Downing Street he had lunged at her and attempted to kiss her on the lips in 2003 after they had lunch together.

And Tory MP Daniel Poulter, who represents Central Suffolk and North Ipswich, has been referred to the Conservative Party disciplinary committee after allegations in the Sunday Times, which he has denied in full.

The allegation regarding Mr Green, who is effectively the prime minister’s deputy, relates to an inquiry into Home Office leaks which briefly led to his arrest in 2008.

The Sunday Times reports that the man who led that inquiry, former Metropolitan Police Assistant Commissioner Bob Quick, had said in a statement his officers had found pornographic material on the computer from Mr Green’s office.

Speaking to BBC News, the former anti-terror chief said he had made an appointment to speak to a senior official in the Cabinet Office, which last week launched an inquiry into Mr Green’s alleged behaviour.

“I bear no malice to Damian Green,” he said.

Mr Quick, who quit his role in 2009 after inadvertently revealing secret documents, accepted he had not asked officers to report the matter at the time, saying they “didn’t expect to find the material” and were in the midst of a “very difficult inquiry with a lot of pressure to drop the case”.

But Mr Green said: “The allegations about the material and computer, now nine years old, are false, disreputable political smears from a discredited police officer acting in flagrant breach of his duty to keep the details of police investigations confidential, and amount to little more than an unscrupulous character assassination.”

The Cabinet Office inquiry was triggered after journalist Kate Maltby, who is three decades younger than Mr Green, told the Times he “fleetingly” touched her knee during a meeting in a pub in 2015 and a year later sent her a “suggestive” text message after she was pictured wearing a corset in the newspaper.

Mr Green said any allegation that he made sexual advances to Ms Maltby was “untrue (and) deeply hurtful”.

Home Secretary Amber Rudd told the BBC it was right all allegations were investigated but she said her cabinet colleague had the right to defend himself and she noted the “strong statements” he had made.

“I do think that we shouldn’t rush to allege anything until that inquiry has taken place,” she told Andrew Marr.

More generally, she said abuse of power could not be tolerated and there needed to be a “clearing out” of Westminster to get rid of any such behaviour.

Meanwhile, Conservative MP Anna Soubry has said former defence secretary Sir Michael Fallon “brought his own downfall on himself” amid fresh claims about his past behaviour.

Ms Merrick, who was a 29-year-old reporter at the Daily Mail at the time, told the Observer she “shrank away in horror” when Sir Michael tried to kiss her before returning to her office in the press gallery.

“I felt humiliated, ashamed. Was I even guilty that maybe I had led him on in some way by drinking with him?” she said. “After years of having a drink with so many other MPs who have not acted inappropriately towards me, I now know I was not.”

Friends of Sir Michael have not denied the allegation, but the BBC understands that his ministerial career ended because he could not guarantee there would be no further revelations after he admitted repeatedly touching another journalist’s knee at a conference dinner 15 years ago.

Ms Soubry praised the journalist’s “outstanding bravery” in coming forward and said she had put her in touch with Downing Street after Ms Merrick had confided in her and Labour’s Harriet Harman.

Theresa May, she added, must ensure an independent complaints system immediately so victims of harassment and those accused of misconduct did not have to undergo “trial by newspapers”.

“People must have a system where they don’t have to go to the press or happen to find some MP’s phone number who they know will take these matters seriously,” she told Andrew Marr.

Britain Could Be Smoke-Free By 2040