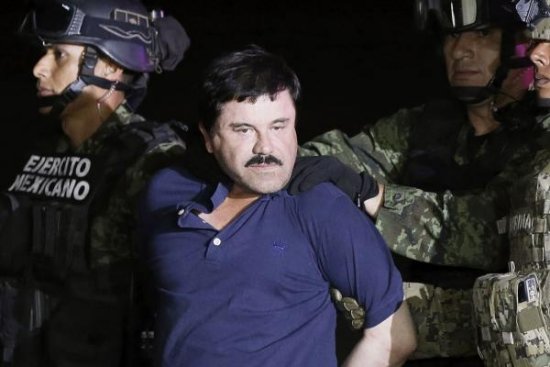 Defense attorney Eduardo Balarezo sent a letter to a federal judge Thursday asking for a neuropsychological exam for Guzman.

“it is plain to the defense team that something is not right with Mr. Guzman,” the letter read.

Guzman’s lawyer has repeatedly criticized his client’s conditions in jail.

Guzman escaped from prison twice in Mexico so he is being held in a high-security section of the federal jail in Manhattan. He is isolated from other inmates and visitors for 23 hours a day with 1 hour for exercise.

Balarezo’s letter says Guzman is allowed minimal contact with his defense team and family. He also complained of “frigid” cell temperatures, lack of clean bed linens and fresh air, and constant lighting in his cell disrupting his sleep.

In October, Balarezo asked to be able to have in-person meetings with Guzman, who was being kept separate by a partition. U.S. District Judge Brian Cogan said the men may have a slot through which to pass papers.

Balarezo said Guzman has complained of auditory hallucinations, depression and a feeling of persecution, and he believes the government is recording his visits.

“Counsel has noticed that Mr. Guzman has begun repeating himself often and sometimes forgetting what the discussion is about,” Balarezo wrote. “In addition to his apparent mental decline, Mr. Guzman also suffers from myriad physical problems, including constant headaches, ringing in his ears and throat pain.

After his capture in 2016, Guzman was held in a Mexican prison prior to his extradition to the United States. He complained of jail conditions there, too, accusing jailers of torture.

“He told me verbatim: ‘Every two hours at night, they wake me stridently for roll call. … They are converting me into a zombie, they don’t let me sleep. What I want is, nothing else, for them to let me sleep,'” his lawyer, Juan Pablo Badillo, said at the time.

Guzman wrote a letter to another lawyer in Mexico saying a barking dog outside his cell “scares my sleep.”

Guzman’s cartel is credited with dominating the illegal drug market in nearly the entire United States, according to a report by the U.S. Drug Enforcement Administration. The report states the criminal organization is most powerful “along the West Coast, through the Midwest and into the Northeast.”