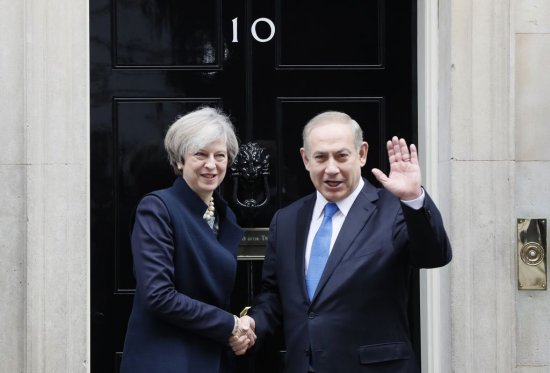 Prime Minister Theresa May and Israeli counterpart Benjamin Netanyahu on Thursday were preparing to celebrate the centenary of a British declaration that ultimately led to the foundation of the state of Israel.

“We are proud of our pioneering role in the creation of the state of Israel,” May will say at a dinner in London to mark the date alongside Netanyahu, according to extracts released by her office.

May will also warn about a “pernicious form of anti-Semitism which uses criticism of the actions of the Israeli government as a despicable justification for questioning the very right of Israel to exist.”

On the second day of his five-day visit to Britain, Netanyahu was set to meet with May in her Downing Street office and hold talks with British Foreign Secretary Boris Johnson, including on the Iran nuclear agreement.

The dinner will be attended by dignitaries including a descendant of the Balfour Declaration’s author, then foreign secretary Lord Arthur Balfour who called for “a national home for the Jewish people”.

The declaration is seen as a precursor to Israel’s creation in 1948 and the anniversary is a joyous occasion for Israelis but is contentious for many Palestinians who say it led to hundreds of thousands fleeing or being forced from their homes.

Speaking ahead of his departure for London, Netanyahu said: “The Palestinians say that the Balfour Declaration was a tragedy. It wasn’t a tragedy.

“What’s been tragic is their refusal to accept this 100 years later. I hope they change their mind, because if they do they can move forward finally to making peace between our two peoples,” he said.

“A peace deal that must be based on a two-state solution, with a secure and prosperous Israel alongside a viable and sovereign Palestinian state.”

Jeremy Corbyn, leader of the Labour main opposition, will not attend the dinner due to “other engagements” and is sending foreign affairs spokeswoman Emily Thornberry instead, the party said.

Labour has been embroiled in a number of rows over anti-Semitism under his leadership, and Corbyn himself has in the past come under fire for meeting representatives of Hezbollah and Hamas.