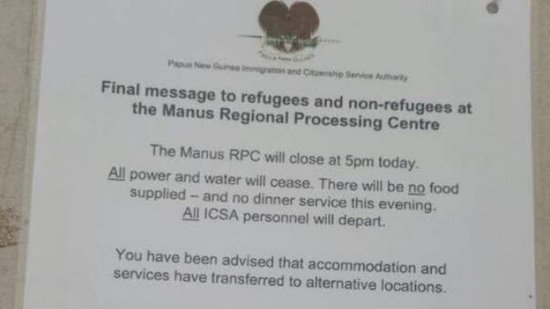 Refugees held by Australia in Papua New Guinea have launched legal action over the closure of a detention centre.

Australia holds asylum seekers arriving by boat in camps on PNG’s Manus Island and the small Pacific nation of Nauru.

The Manus Island centre is scheduled to close on Tuesday after a PNG court ruled it was unconstitutional.

Detainees argue the closure will breach their human rights by denying them access to water, electricity and security. Many are refusing to leave.

The local authorities have warned that all electricity, drinking water and food at the centre will cease at 17:00 local time (07:00 GMT), and that PNG defence authorities could enter the centre as early as Wednesday.

Refugees told the BBC that detainees planned to protest peacefully, and had begun stockpiling water and dry biscuits, as well as setting up makeshift catchments for rainwater.

They claimed that locals began looting the compound on Tuesday after security guards left.

About 600 refugees and asylum seekers do not want to go to temporary accommodation in the Manus Island community, citing fears for their safety.

Last week, Human Rights Watch warned that the group could face “unchecked violence” by locals who had attacked them in the past – sometimes with machetes and rocks.

Canberra has consistently ruled out transferring the men to Australia, arguing it would encourage people smuggling and lead to deaths at sea.

However, PNG has said it is Australia’s responsibility to provide ongoing support for the men. The Australian government says PNG is responsible for them.

Some men already in the temporary accommodation were “comfortably accessing services and supports there”, Australia’s Department for Immigration and Border Protection said on Tuesday.

Greg Barns, a lawyer assisting with the legal action, said the closure would breach rights enshrined in PNG’s constitution.

“The men are vulnerable to attacks and physical harm so we are seeking to ensure their constitutional rights are not breached and there is a resumption of the basic necessities of life,” he told the BBC.

“The men have been dumped on the street, literally. What is going on is unlawful.”

The application also seeks to prevent the forcible removal of the men to an alternative centre on the island, and calls for them to be transferred to Australia or a safe third country.

The refugees can permanently resettle in PNG, apply to live in Cambodia, or request a transfer to Nauru, but advocates say few have taken up these options.

Alternatively, up to 1,250 refugees in PNG and Nauru could be accepted by the US under a resettlement deal.

However, America has not given an estimate of how long the application process will take and it is not obliged accept all of them.

In October, the UNHCR said 1,700 detainees in the two centres had either been granted refugee status or were awaiting a determination. The claims of a further 400 had been rejected.

Six asylum seekers have died since 2013, including an Iranian man, Reza Barati, who was murdered during a riot.

Earlier this year, the government offered compensation totalling A$70m (£41m; $53m) to asylum seekers and refugees detained on Manus Island who alleged they had suffered harm while there.

The lawsuit alleged that detainees had been housed in inhumane conditions below Australian standards, given inadequate medical treatment and exposed to systemic abuse and violence.

The government called the financial settlement “prudent”, but denied wrongdoing.

Australia to ban climbing on Uluru from 2019