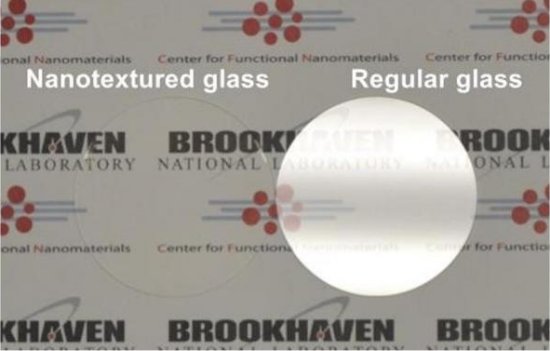 Glare is created by light reflection. The amount light waves bend as they move through a material is called the refractive index. When light passes from glass to air, it experiences a sudden change in refractive index, causing some of the light to be reflected.

Scientists at Brookhaven found they could make the shift in reflective indexes more gradual by texturing glass surfaces with nanoscale patterns.

Researchers used the self-assembling pattern of molecules that form block copolymers as a template for texturing the glass. The repeating pattern features nanoscale cone-shaped structures. When applied to glass, the pattern almost completely removes surface reflections.

“We have eliminated reflections from glass windows not by coating the glass with layers of different materials but by changing the geometry of the surface at the nanoscale,” Andreas Liapis, a postdoctoral lab researcher at CFN, said in a news release. “Because our final structure is composed entirely of glass, it is more durable than conventional antireflective coatings.”

Researchers described their new technology in a paper published this week in the journal Applied Physics Letters.

“Our role in the CFN is to demonstrate how nanoscience can facilitate the design of new materials with improved properties,” said CFN Director Charles Black. “This work is a great example of that — we’d love to find a partner to help advance these remarkable materials toward technology.”