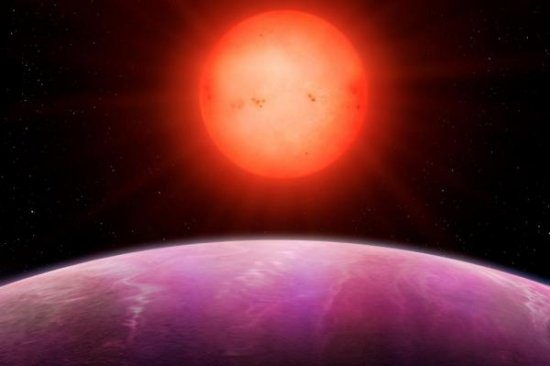 According to planet formation theory, NGTS-1b should not exist. The exoplanet is too big — so big that scientists are calling it a “monster” planet.

NGTS-1b is a gas giant commonly known as a “hot Jupiter.” Hot gas giants aren’t uncommon, but according to planet formation theory, such a massive planet shouldn’t be circling such a small star.

The gravity of small stars can accumulate enough material to form small rocky planets, but not enough to birth massive gas planets.

“Despite being a monster of a planet, NGTS-1b was difficult to find because its parent star is so small and faint,” Peter Wheatley, professor at the University of Warwick, said in a news release.

While NGTS-1b is the first such gas giant found so close to a faint star, astronomers suggest there could be many scattered throughout the cosmos.

“Small stars like this red M-dwarf are actually the most common in the universe, so it is possible that there are many of these giant planets waiting to be found,” Wheatley said.

The repetitive dip in red light caused the by the transit of NGTS-1b across the face of its host star was picked up the telescopes participating in the Next-Generation Transit Survey. Spectral data collected by the telescopes helped scientists estimate the planet’s size and orbit.

Researchers detailed their findings in the journal Monthly Notices of the Royal Astronomical Society.

“The discovery of NGTS-1b was a complete surprise to us — such massive planets were not thought to exist around such small stars — importantly, our challenge now is to find out how common these types of planets are in the galaxy, and with the new Next-Generation Transit Survey facility we are well-placed to do just that.”