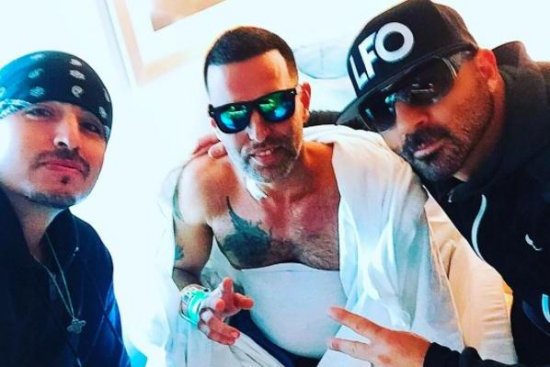 LFO singer Devin Lima was recently diagnosed with a rare, “one in a million” cancer.

“I’m here to give you the latest update on Devin,” Fischetti said. “Devin asked me to give you this update without him because frankly, he’s not feeling very well, but he asked me to send you his love and gratitude for all the love and prayers you guys have sent his way.”

“The pathology report came back and unfortunately, it confirmed cancer,” he shared. “What kind of cancer? Adrenal cancer. Primary adrenal cancer, which means it started in the adrenal gland, which is really rare. It’s like a one in a million cancer.”

Fischetti said Lima is “resting and healing” at home after undergoing surgery to remove a tumor from his adrenal glands, and one of his kidneys, which the cancer had spread to. The singer will soon begin chemotherapy, radiation and a long-term medication.

“Adrenal cancer is very aggressive and they’re concerned there may be cancer cells present within his body, and that’s why they want to attack it with chemo and radiation,” Fischetti explained.

“I wish we had better news to share. It’s devastating news. But at the same time, there’s nobody I know stronger than Devin Lima,” he said. “If anybody can defeat this, it’s Devin.”

LFO previously announced on their official Instagram account that Lima had “lost a kidney and an adrenal gland” to a tumor. Fischetti said in the video that Lima hopes to eventually record new music with LFO and return to the stage.

LFO came to fame in the 1990s with the singles “Summer Girls” and “Girl on TV.” The group last released the album Life is Good in 2001, and returned with their first new song in 15 years, “Perfect 10,” in July.

Canadian actress sues Weinstein and his ex-assistant for sexual assault