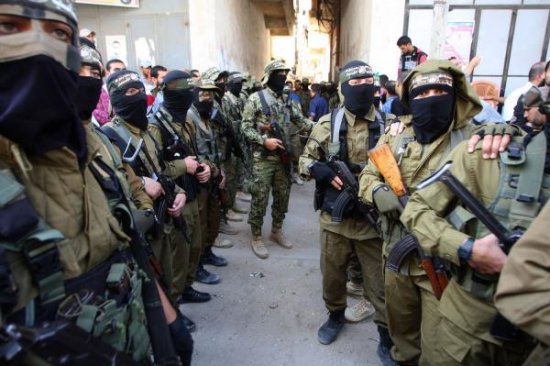 A Hamas leader on Tuesday promised revenge — but not immediately — for the deaths of seven Palestinians when Israel blew up an attack tunnel that stretched into its territory.

“I assure the leadership of [Palestinian] Islamic Jihad: blood for blood, destruction for destruction,” Ismail Haniyeh said during the funeral in Khan Younis Tuesday for those killed in the tunnel.

The tunnel, which was built and controlled by the PIJ terror group, ran beneath Khan Younis and crossed underneath the Israeli border less than 2 miles from the village of Kissufim

Killed in the explosion were five militants associated with the PIJ, including two senior leaders and two members of Hamas’ military during a rescue operation, according to the group.

Israel Defense Forces spokesperson Avichay Adraee said the “majority of the dead were operatives who entered the tunnel after it was blown up and died in the Gaza Strip, and not as a [direct] result of the explosion.”

Before retaliating against Israel, Haniyeh said Hamas first wants to reconcile with the Fatah party, which controls the Palestinian Authority.

“The response to this massacre is to move forward toward the restoration of national unity because the enemy knows that our strength is in our unity and no people under occupation can win if they are not united,” Haniyeh said.

“This enemy deludes itself if it believes that by means of this massacre it will impose its rules of the game upon us. Our determination is stronger than the enemy,” Haniyeh added. “We will continue our efforts to achieve Palestinian unity — this is one of the ways of responding to this massacre.”

“We are a prudent resistance that knows how to manage its conflict with the enemy,” he said at the funeral. “[We] know how to avenge and to strike in the specific place and time that will hurt the enemy.”

The Times of Israel reported Egyptian officials urged Hamas to show restraint and allow the reconciliation process to continue.

IDF said it would be ready if Hamas retaliates, including the possible deployment of its Iron Dome anti-missile system, Chief of Staff Gadi Eizenkot said Tuesday

“Any response or violation of Israel’s sovereignty will be met with clear determination as we have done in the past 24 hours. We are determined to continue to provide security for the citizens of Israel and the residents of the Gaza vicinity.”

Eizenkot said “the IDF’s action removed a threat from Israeli citizens, and it joins the many overt and covert actions that our forces do and will continue to do at any time and in any situation. This was an impressive and praiseworthy achievement.”

Israeli military spokesman Lt. Col. Jonathan Conricus said the tunnel apparently was built after the conflict between Israel and Gaza in 2014.

Pentagon: Raqqa, Syria still too dangerous for civilians to return