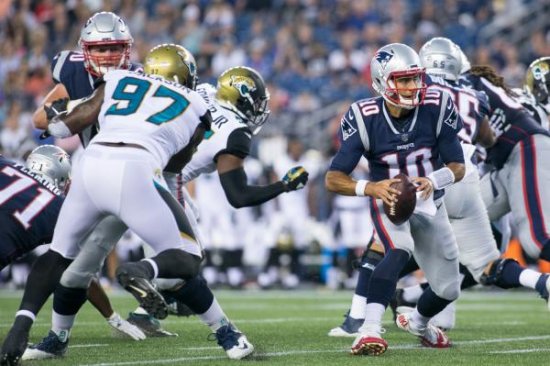 Garoppolo enjoyed a successful stint while filling in during Tom Brady’s suspension related to “Deflategate” last season. The Eastern Illinois product completed 68.3 percent of his passes with four touchdowns and no interceptions.

He won both of his starts before sustaining a shoulder injury. Garoppolo subsequently was replaced for the last two games of Brady’s suspension by the Patriots’ then-third-stringer, Jacoby Brissett.

The 25-year-old quarterback, who was selected in the second round of the 2014 draft by New England, was a hot trade commodity during the summer before remaining as Brady’s backup.

In 17 career NFL games (just the two starts), Garoppolo has completed 63 of 94 passes for 690 yards and five touchdowns with no interceptions.

Garoppolo will head to San Francisco and be under the watch of coach Kyle Shanahan, who has seen quarterbacks Brian Hoyer and third-round pick C.J. Beathard struggle for the 49ers (0-8). Hoyer was replaced by Beathard in Week 6, with the latter tossing three interceptions in his two-plus games.

In the wake of the reported trade, the 49ers released Hoyer on Monday evening, making him an option to rejoin the Patriots, his former team. With Garoppolo gone, the only quarterback on the New England roster would be Brady.

Hoyer, 32, backed up Brady for the Patriots from 2009-11, appearing in 13 games and making no starts. He subsequently earned starts with the Arizona Cardinals, Cleveland Browns, Houston Texans, Chicago Bears and San Francisco, going 16-21.

In 55 career games, Hoyer has a 59.3 percent completion rate with 9,853 passing yards, 48 touchdowns and 30 interceptions. This season, he was 0-6 as a starter for the 49ers with four TD passes and four interceptions.