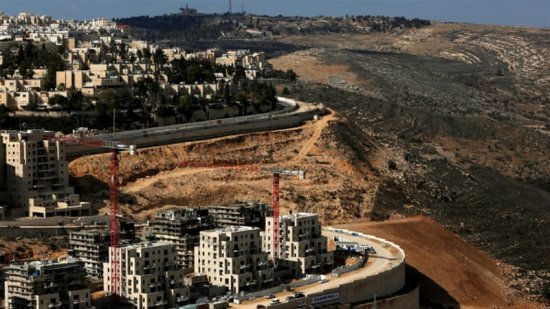 Israel has delayed a vote on a controversial bill that would annex illegal settlements in the occupied West Bank to the Israeli-defined boundaries of the city of Jerusalem.

The so-called “Greater Jerusalem bill” was meant to be voted on by a ministerial committee on Sunday before going to the Knesset, the Israeli parliament, for approval.

The Israeli government did not say why the vote was postponed, but an official speaking on condition of anonymity told the Israeli daily Haaretz that the bill’s current version “invites international pressure and involves difficult legal issues”.

If passed, the legislation would annex to the municipal boundaries of Jerusalem the three major mega-settlement cities of Maale Adumim, Givat Zeev and Gush Etzion, which together house around 140,000 Israelis. It would add the Israelis who live there to the population of Jerusalem, thus allowing them to vote in local elections.

Simultaneously, the bill would create “independent municipalities” for several Palestinian neighbourhoods, housing at least 100,000 people, that are part of the Jerusalem municipality but cut off from the city by Israel’s separation wall.

The purpose is to ensure a Jewish majority in the city of Jerusalem. Palestinian Arabs currently make up some 40 percent of Jerusalem’s population and Israeli Jews the remainder.

“The government will approve the Greater Jerusalem law that will strengthen the eternal capital Jerusalem – demographically and geographically,” Yoav Kish, the Knesset member who submitted the proposal for the bill, said on Twitter last week before the vote was postponed.

Yisrael Katz, another MK who aided in the proposal, said the bill’s intent was to “ensure a Jewish majority in the united city and to expand its borders”, according to a report in the Jerusalem Post.

“It is an unequivocal response to all those in the international community who are questioning the Jewish people’s right to Jerusalem,” Katz reportedly stated.

Hanan Ashrawi, a Palestine Liberation Organization (PLO) legislator, said that Israel has been able to push forward such settlement policies due to the “failure of the world’s governments to hold Israel accountable for its deliberate violations of international law”.

“Through its settlement policies, Israel is working to consolidate the occupation, prolong it and maintain it by extending legitimacy to the presence of extremist settlers in the Palestinian territories, and continue to isolate Jerusalem, our occupied capital, and annex it fully, to end the two-state solution,” she said.

The law is just one of a number of ways in which Israel has worked to consolidate its hold over the city and Judaise it.

The settlements set to be incorporated into the Jerusalem boundaries are already connected to the city through roads and bridges built solely for Israeli settlers.

Amany Khalifa, an activist with the local advocacy group Grassroots Jerusalem, says that implementing this law is just the final step towards changes that have already been largely implemented.

“This has always been the Zionist policy. They take real steps on the ground, and then they take care of the technical details, such as voting and passing this law,” Khalifa told Al Jazeera.

Israel occupied East Jerusalem in 1967 and proceeded to effectively annex it, in breach of international law.

In 1980, Israel passed the “Jerusalem Law”, stating that “Jerusalem, complete and united, is the capital of Israel”, thereby formalising its annexation of East Jerusalem.

“The objective of demographic control and solidifying a Jewish majority has driven Israeli policy towards Jerusalem for decades,” Omar Shakir, the Israel and Palestine Director at Human Rights Watch, told Al Jazeera.

“If passed, the Greater Jerusalem Bill would further entrench the reality of one set of rules for Jews and another for Palestinians.”

Bahrain foreign minister calls for freezing Qatar out of GCC