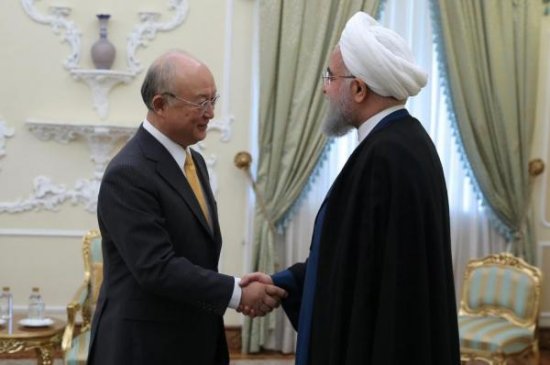 After holding a series of meetings with Iranian officials in Tehran on Sunday, Yukiya Amano, head of the International Atomic Energy Agency, confirmed Iran is in compliance with the Joint Comprehensive Plan of Action, more commonly referred to as the 2015 nuclear deal.

The announcement served as a rebuke of President Donald Trump, who has claimed Iran is violating the deal.

“The most important thing is to be factual,” Amano told reporters on Sunday. “I have always been factual since I became director general of the IAEA. Sometimes I have to report bad news but I also report the good news. It is very important to stick to the rules and I will continue to do so.”

The White House has threatened to spearhead new sanctions against Iran should the terms of the 2015 deal not be strengthened. Over the weekend, Iran’s President Hassan Rouhani responded to the threats, saying Iran would continue to build the weapons they need for their own defense.

“We are going to manufacture and store any kind of weapons we need,” Rouhani told the country’s parliament. “And this is to defend ourselves and the unity of our land and people. And we will not hesitate to use them in the appropriate time to defend ourselves.”

After meeting with Rouhani and other Iranian leaders, Amano said he and IAEA would continue to monitor and verify Iran’s compliance with stipulations made by the JCPOA. The IAEA chief also stressed that most international leaders are in support of the nuclear deal and are committed to its maintenance.

“The IAEA’s verification and monitoring activities are conducted in an impartial and objective manner and in accordance with the modalities defined by the JCPOA and standard safeguards practice,” Amano said.

While the White House has claimed Iran’s pursuit of an expanded missile program violates the spirit of the nuclear deal, Iran claims the threat of sanctions by the United States has undermined the agreement.

Under the JCPOA, a variety of economic sanctions against Iran were lifted, allowing companies to do business in the country. But uncertainty about the shifting U.S. approach to Iran and the deal has many international companies acting especially cautious.

“What happens is that most of the international companies, they don’t know what to do,” Emad Abshenass, a political analyst based in Tehran, told Al Jazeera. “They are afraid to invest or start implementing their agreements with Iran.”