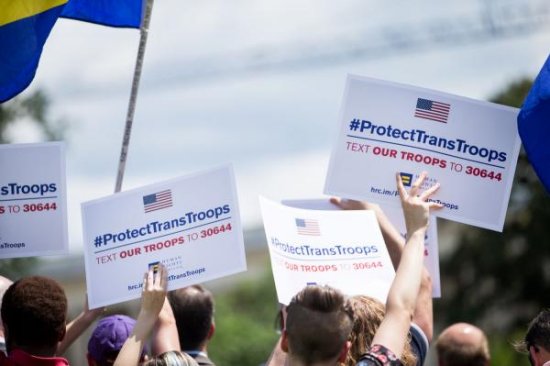 Washington, D.C., District Court Judge Colleen Kollar-Kotelly ruled that the memo directing the Pentagon to revert to its transgender policy prior to June 2016 may not be enforced as a lawsuit works its way through the courts.

Kollar-Kotelly said a group of transgender military members are likely to win their suit against the Trump administration, and lifted part of the ban pending the results of the case.

“On the record before the court, there is absolutely no support for the claim that the ongoing service of transgender people would have any negative effective on the military at all,” she wrote in the ruling. “In fact, there is considerable evidence that it is the discharge and banning of such individuals that would have such effects.”

On Aug. 25, Trump signed a memorandum saying the department may not recruit people who identify as transgender and may not use federal funds to provide medical treatment, including sex-reassignment surgeries and medications.

Monday’s ruling left the ban on medical treatments in place.

The Department of Defense prohibited transgender individuals from serving openly in the military until June 2016, when the Obama administration repealed the law.

“In my judgment, the previous administration failed to identify a sufficient basis to conclude that terminating the departments’ longstanding policy and practice would not hinder military effectiveness and lethality, disrupt unit cohesion, or tax military resources, and there remain meaningful concerns that further study is needed to ensure that continued implementation of last year’s policy change would not have those negative effects,” Trump’s memo read.

“Thousands of transgender troops currently serve in the U.S. military and thousands more have served and given their lives for the country throughout our history,” the commission said in a statement. “These military men and women honor our country and defend all its citizens with their service.”

“This is the first decision striking down President Trump’s ban, but it won’t be the last. As all of these cases move forward, we will continue to work to ensure that transgender service members receive the equal treatment they deserve,” the organization said.