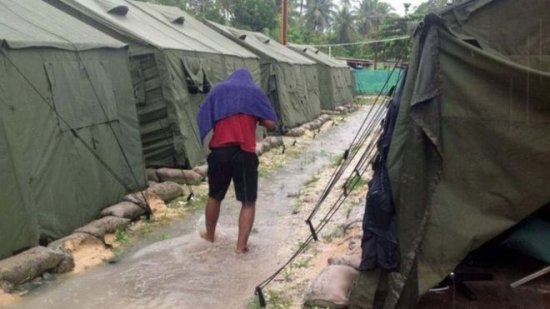 Papua New Guinea has said that Australia is solely responsible for refugees who do not want to resettle in PNG when its detention centre closes.

Australia has held asylum seekers on PNG’s Manus Island since 2012. The camp is scheduled to close on Tuesday.

PNG says refugees will not be forced to stay in the nation against their will – while those without refugee status cannot stay either.

Canberra has consistently said that none will be transferred to Australia.

Australia controversially holds refugees and asylum seekers who arrive by boat in centres on PNG’s Manus Island and the Pacific nation of Nauru – arguing that it prevents deaths at sea and discourages people smugglers.

However, rights groups say conditions in PNG and Nauru are cramped and inadequate, cause widespread psychological harm, and expose asylum seekers to dangers including physical and sexual assaults.

The PNG centre will close on 31 October, after a local court ruled it was unconstitutional to detain people there.

Refugees at the centre can apply for permanent resettlement in PNG, apply to live in the US or Cambodia, or request a transfer to Australia’s other offshore detention centre in the Pacific nation of Nauru.

Human Rights Watch has estimated about 770 men – most of whom have been classified as refugees – remain on Manus Island. It say a majority do not want to stay in PNG.

The Australian government has set up temporary accommodation on Manus Island, but hundreds of detainees are refusing to move there, citing fears for their safety. The detainees have been attacked by locals, rights groups say.

In a statement, PNG Immigration Minister Petrus Thomas said his nation was under no obligation to support:

Mr Thomas said “these two cohorts … remain the responsibility of Australia to pursue third-country options and liaise with respective governments of the non-refugees for their voluntary or involuntary return”.

“There must be a review of the arrangement to clarify these international obligations and officials will be discussing the details of a revised agreement in the next few days,” he said.