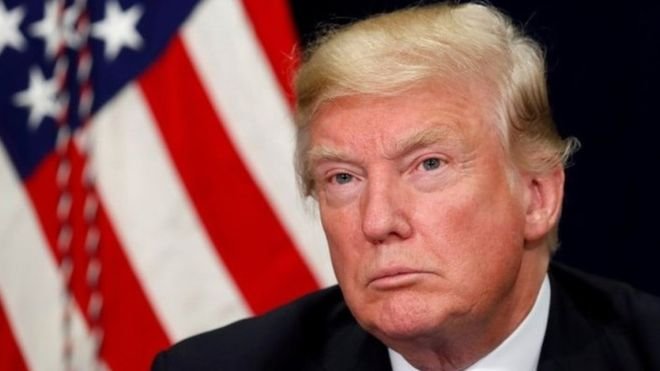 US President Donald Trump has launched a Twitter tirade about the “guilt” of Hillary Clinton and the opposition Democratic Party.

His Sunday morning outburst came amid reports that the first arrest in the Russian collusion inquiry would be made this week, possibly as early as Monday.

Mr Trump insisted allegations of collusion between his campaign and Russia were “phony” and a “witch hunt”.

He said Republicans were united behind him, before urging: “DO SOMETHING!”

Media reports say the first charges have been filed in the investigation led by special counsel Robert Mueller into alleged Russian interference in the 2016 election to assist Mr Trump.

It is not clear what the charges are and whom they are targeting, CNN and Reuters report, quoting unnamed sources.

About an hour later he tweeted: “All of this ‘Russia’ talk right when the Republicans are making their big push for historic Tax Cuts & Reform. Is this coincidental? NOT!”

Critics on Twitter were quick to accuse him of attempting to divert attention from the Russian investigation by complaining about the lack of focus on an opponent he defeated in the presidential election nearly a year ago.

US intelligence agencies have already concluded that the Russian government sought to help Mr Trump win the election.

Mr Mueller’s investigation is looking into any links between Russia and the Trump campaign. Both deny there was any collusion.

His team is known to have conducted extensive interviews with several current and former White House officials.

Mr Mueller, a former FBI director, was appointed by the department of justice as special counsel in May shortly after Mr Trump fired FBI director James Comey.

Mr Trump said on Friday that it was now “commonly agreed” that there was no collusion between him and Russia but said that there were links between Moscow and Mrs Clinton.

Republican lawmakers have said that a uranium deal with a Russian company in 2010, when Mrs Clinton was secretary of state, was sealed in exchange for donations to her husband’s charity.

A Congressional investigation has been opened into the case. Democrats say it is an attempt to divert attention from the alleged ties between Russia and Mr Trump.