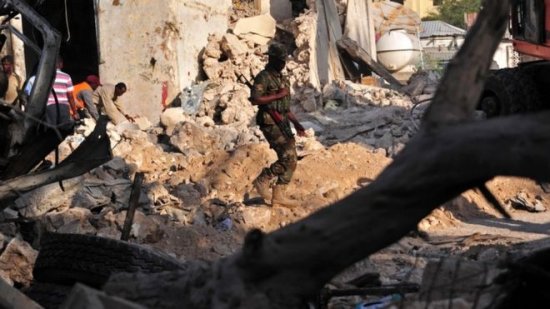 The Somali government has fired two top security officials after twin blasts and a siege left at least 27 people dead on Saturday.

They came just two weeks after at least 358 people died in another attack, one of the deadliest ever to hit Mogadishu.

Police chief Abdihakin Dahir Saiid and the director of national intelligence, Abdillahi Mohamed Sanbaloosh, were both removed from office on Sunday.

Police say three militants were captured alive and two others blew themselves up during the attack.

The siege started on Saturday afternoon after a car bomb was driven into the Nasahablod Two hotel. A few minutes later, a second car bomb targeted the former parliament house nearby.

Al-Shabab – with has links with al-Qaeda – denies having any involvement in the 14 October attack.

The militants say they targeted the hotel on Saturday because it was frequented by security officials and politicians.

The dead included at least 12 policemen. Many more people were injured.

Provincial leaders, police and intelligence officials were gathering for a meeting with the government to agree on a joint strategy against al-Shabab, due to take place on Sunday.