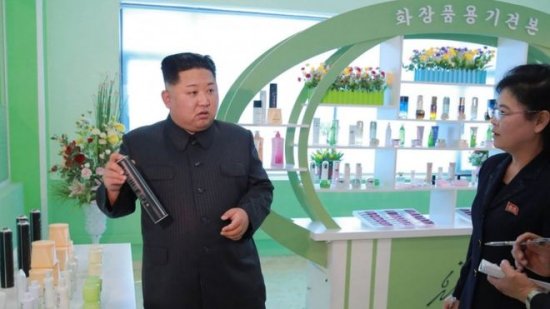 North Korean leader Kim Jong-un has taken time away from the confrontation with the US and allies to visit a cosmetics factory in Pyongyang.

He went to the newly renovated factory with senior party members and his rarely seen wife, Ri Sol-ju.

The site was visited by his father and precessessor Kim Jong-il 14 years ago.

The visit was broadcast on state media, one day after US Defence Secretary Jim Mattis said his country would “never accept” a nuclear-armed North Korea.

Mr Mattis said any use of such weapons would be met with a “massive military response”, while visiting Seoul on Saturday.

Tension has risen on the peninsula over a series of North Korean missile and nuclear tests and escalating rhetoric between Kim Jong-un and US President Donald Trump.

The visit made a stark difference from the leader’s usual photo opportunities with missiles and weapons, as he instead posed with soap and beauty products.

He praised the company and called on it to produce world-class cosmetics.