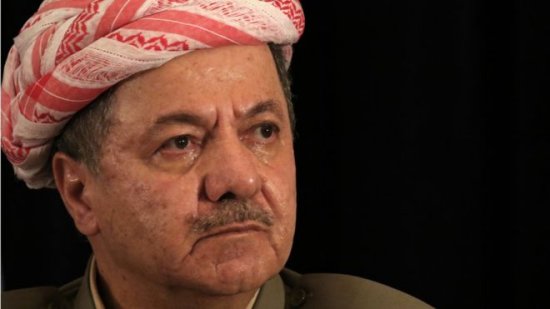 Iraqi Kurdish president Massoud Barzani is to step down as the region wrestles with Baghdad over independence.

In a letter to the Kurdish parliament he said he would not seek an extension to his term, which ends in four days.

As MPs were discussing Mr Barzani’s letter, protesters forced their way into the Kurdish parliament buildings.

Some of the demonstrators have clubs, and gunshots have also been heard, according to eyewitnesses in Irbil, the capital of Iraqi Kurdistan.

In his letter, Mr Barzani says: “I ask parliament to meet to fill the vacancy in power.”

He added that he would remain a Peshmerga, or Kurdish fighter, and “continue to defend the achievements of the people of Kurdistan”.

The 71-year-old’s dream of Kurdish independence has been left in tatters in the wake of the referendum on 25 September, despite wide support within the region to see it break away.

He held office from 2005, having played a prominent role in creating an autonomous Kurdish state in northern Iraq after Saddam Hussein fell.

Mr Barzani went on to win another presidential election in 2009, and his term was extended in 2013.

After Iraqi military reclaimed the disputed, oil-rich province of Kirkuk earlier this month, he faced calls to stand down.

Presidential and parliamentary elections due for 1 November were suspended when the Kirkuk assault started.

Who is Massoud Barzani?

He was born in August 1946 in the short-lived Kurdish Republic of Mahabad in Iran.

On the same day, his father Mustafa Barzani, who led the republic’s army, founded the Kurdistan Democratic Party (KDP).

Following the collapse of the republic, Mustafa Barzani – a much-revered figure in the Kurdish national movement – fled to the Soviet Union. Massoud later returned to Iraq and lived with his grandfather in Mosul.

He took control of the KDP on his father’s death in 1979, and escaped an assassination attempt in Vienna the same year.

In 2014, after ordering his Peshmerga forces to join the fight against Islamic State militants, he was named a runner-up in Time magazine’s Person of the Year prize.

IAEA head says Iran is in compliance with nuclear agreement