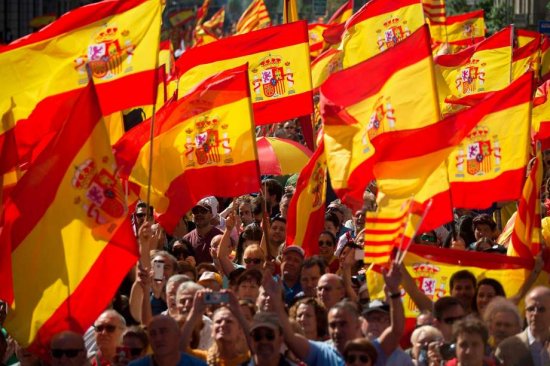 Hundreds of thousands have attended a rally for Spanish unity in Barcelona after Catalonia was stripped of its autonomy for declaring independence.

Many of those protesting in the region’s largest city chanted that sacked Catalan leader Carles Puigdemont should be jailed.

On Sunday, a minister in Belgium said he could get political asylum there.

Spain has been gripped by a constitutional crisis since a referendum, organised by Mr Puigdemont’s separatist government, was held earlier this month in defiance of a ruling by the Constitutional Court which had declared it illegal.

The Catalan government said that of the 43% of potential voters who took part, 90% were in favour of independence.

The Guardia Urbana, a Catalan municipal police force, said at least 300,000 people had turned out in Barcelona. Organisers and the government in Madrid put the turnout a more than a million people.

Veteran Catalan politician Josep Borrell, a former president of the European Parliament, told demonstrators that Catalonia’s former separatist leaders had no right to speak on behalf of the entire region.

Among the demonstrators was Marina Fernandez, a 19-year-old student, who said she was unhappy with the actions taken by the Catalan authorities.

“I am enraged about what they are doing to the country that my grandparents built,” she told the AFP news agency.

Another protester, Maria Lopez, told Reuters news agency: “What do we want? That they don’t break us up. This is a disgrace. We are not going to consent. They are shameless, shameless, and Mr Puigdemont needs to be taken to prison.”