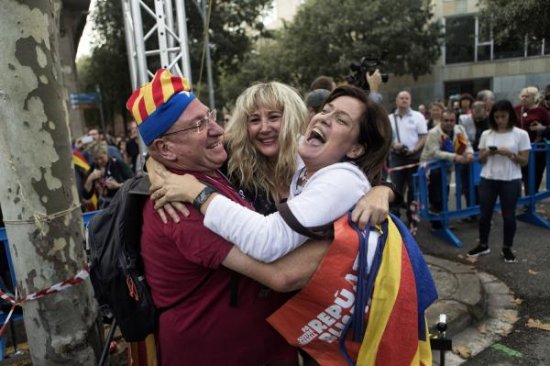 People celebrate the proclamation of a Catalan republic

The Spanish government on Friday dissolved the Catalan Parliament after the legislative body declared its independence, threatening to send tensions spilling into the streets.

By a vote of 70-10, with two abstentions and numerous opposition Parliament members boycotting the vote, the Catalan Parliament took its first full step toward independence.

The legislation directs the semi-autonomous region to begin a process by which it formally secedes from Spain and declares itself a republic. The result of the vote was greeted with cheers within the Catalan legislature and the spontaneous singing of the Catalan anthem “El Segadors.”

Supporters of independence gathered in the streets to celebrate after the vote, but after Madrid announced the dissolution of the Catalan Parliament, separatists promised mass demonstrations.

Spanish legislators in Madrid and Catalan lawmakers in Barcelona each held meetings on Friday to determine what to do next regarding the region’s push for independence. Rajoy, in a 45-minute speech on Friday, asked Madrid’s senate for authorization to remove Catalan leader Carles Puigdemont from office — a prospect allowed by Spain’s Article 155.

The article, known informally as the “nuclear option,” can also remove all members of Catalonia’s government in Barcelona and arrange for a new election within six months.

Minutes after the Barcelona legislature recommended “a Catalan republic as an independent and sovereign state,” the Spanish senate voted to give Rajoy unprecedented powers to assume control of Catalonia.

Ninety percent of voters favored independence in an Oct. 1 referendum in Catalonia, but until Friday the regional government hadn’t taken any formal action to pursue secession. Madrid has regarded the vote as illegal and several world leaders have voiced support for Spain.

Puigdemont said the referendum was a mandate to declare independence and an opportunity for the Spanish government to negotiate Catalonia’s future. However, the leader has not been fully committal to seceding from Spain. Thursday, he declined to call for new elections, a move that would’ve averted intervention from Madrid and effectively ended the growing political standoff.

The Catalan leader continues to face mounting pressure from both sides. Some of his own supporters have publicly split from him on the issue of independence.

Puigdemont’s lack of action prompted the resignation of Santi Villa, a member of the Catalan Cabinet, in protest.