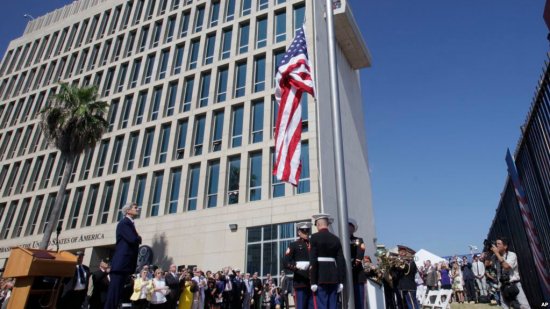 US Embassy in Havana

Cuba Thursday accused the United States of obstructing its probe into mysterious health attacks on American diplomats, claiming its investigators were denied access to the victims and their medical records.

At least 24 US Embassy staff in Havana were sickened by a mysterious ailment in the alleged attacks, which began last year and continued until at least August.

The US — which has not directly blamed Cuba for the attacks but has emphasized its responsibility to ensure the safety of foreign diplomats in its territory — has suggested they may have been carried out using a covert acoustic device.

“US authorities have said the responsibility lies with Cuba to investigate the affair and decide on the case, but has failed to play their part as the affected country,” said Lt. Col. Francisco Estrada, a Cuban senior Interior Ministry official, speaking on a documentary that aired on state television.

He added Cuban investigators were being denied the opportunity to be able to speak to experts, witnesses and victims.

The affair has strained diplomatic ties between the two countries, which were only fully restored in 2015 after a half-century Cold War breakdown.

The most recent attack was at the end of August, according to the State Department.

In response, the US withdrew more than half the personnel from the US embassy in Cuba and ordered the expulsion of 15 Cuban diplomats in the United States.

Related Topics:American diplomatsLatin AmericaUS Embassy in Havana
Up Next

Spain to impose direct rule in Catalonia as crisis spirals