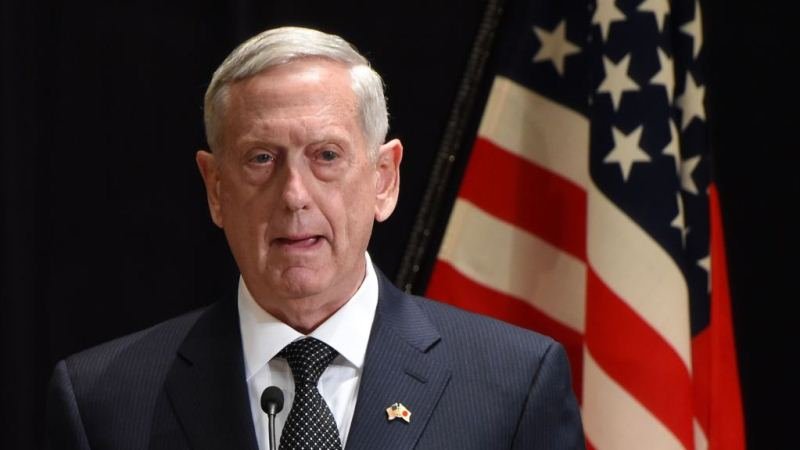 The United States is not seeking a war with North Korea, US defence secretary Jim Mattis said Friday during a visit to the heavily-fortified border between the two Koreas.

Tension has flared on the Korean peninsula as US president Donald Trump and the North’s ruler Kim Jong-un have traded threats of war and personal insults that sparked global alarm.

But Mr Mattis, visiting the Demilitarised Zone between North and South Korea, said the US was committed to a “diplomatic solution”.

“As the US secretary of state Tillerson made clear, our goal is not war but rather the complete, verifiable and irreversible denuclearisation of the Korean peninsula,” he said in the border village of Panmunjom, where a truce between the two Koreas was signed in 1953.

Mr Mattis said that he and the South Korean defence minister Song Young-moo had “made clear our mutual commitment to a diplomatic solution to address North Korea’s reckless, outlaw behaviour”.

The remarks came a day after he said Washington was “not rushing to war” and was looking for a “peaceful resolution”.

Mr Mattis is to hold annual defence talks with Mr Song on Saturday during a two-day trip that comes ahead of a visit by the US president.

Mr Trump is scheduled to visit South Korea, a key US ally in Asia, from November 7 to 8, with all eyes on his message to the North and its leader.

North Korea carried out its sixth nuclear test last month and has launched several missiles in recent months that could reach the mainland of its “imperialist enemy” the US.

The moves, staged in violation of UN resolutions banning the North from any use of atomic and ballistic technology, prompted new US-led UN sanctions against the isolated state.

Pyongyang reacted angrily to the new sanctions, and Mr Trump’s recent remark that “only one thing will work” with the North fuelled concerns of a potential conflict.

But even some Trump advisers say US military options are limited when Pyongyang could launch an artillery barrage on the South Korean capital Seoul — only about 50 kilometres from the border and home to 10 million people.

Mr Song said the nuclear devices and missiles that North Korea was developing were “unusable weapons”, and that any use of them “will be strongly retaliated by the united forces of South Korea and the US”.

“We strongly call for North Korea to stop its reckless provocations and come to the inter-Korean dialogue for peace as soon as possible,” he said.