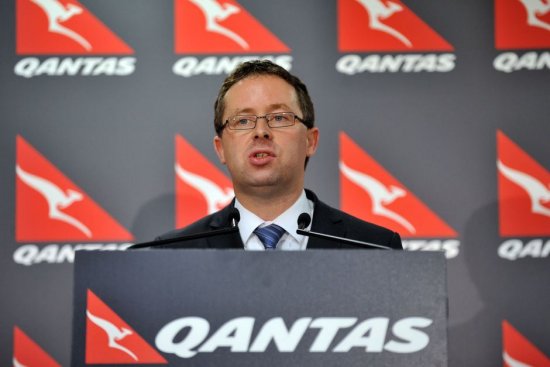 Alan Joyce, boss of the Australian airline Qantas, has been named the world’s most influential LGBT business executive in an annual listing.

He was chosen for his vocal campaigning in favour of same-sex marriage, an issue Australians are voting on now.

“No one should feel like they need to live a double life,” said Mr Joyce.

“In the past year I’ve worked hard to drive changes in my own workplace and indeed my own country,” Mr Joyce said.

As well as speaking up personally on the question of same-sex marriage, Mr Joyce has encouraged other business leaders to join him in campaigning for a “yes” vote in the Australian ballot. He said more than 1,300 firms have put their name to the cause.

Prime Minister Malcolm Turnbull has promised that if a majority of Australians support same-sex marriage in the poll, parliament will debate amending the Marriage Act, which could lead to the country becoming the 25th country to permit same-sex marriage.

The ballot will close on 7 November; latest reports indicate that nearly three-quarters of eligible voters have already returned their ballots with nearly two weeks left to go.

“As an openly gay man and being the leader of this organisation and a high profile business leader in Australia, I felt it was very important that I led by example and was out there promoting the case,” Mr Joyce told the BBC.

Mr Joyce was born in Ireland and took over as chief executive of Qantas in 2008. Last month eyebrows were raised as his remuneration package almost doubled to nearly A$25m following a significant rise in the Qantas share price.

“I think Australia is a great meritocracy. Where else in the world would you have an openly gay Irish man coming to this country to run probably the most iconic Australian brand in the world?” he said.

However, in March Australia’s Immigration Minister Peter Dutton criticised Mr Joyce and other business leaders for intervening in the debate. And in May a man smeared a lemon meringue pie in Mr Joyce’s face during a public event, apparently in response to his pro-equal marriage stance.

The OUTstanding list, which has been running for five years, also names the chief executive of Campbell Soup, Denise Morrison, as the leading “Ally Executive” for her role in supporting members of the LGBT community in the workplace.

The list’s authors said Ms Morrison had gone further than other executives in supporting diversity, through policies such as celebrating Pride events, offering a gender-neutral parental leave policy and urging the repeal of a measure in North Carolina requiring transgender persons to use bathrooms corresponding to the sex on their birth certificate.

Stuart Barette, a senior project manager at HSBC, was named OUTstanding Future Leader and praised as a transgender role model.

N. Korea threatens Australia with ‘disaster’ for engagement in US ‘war preparations’