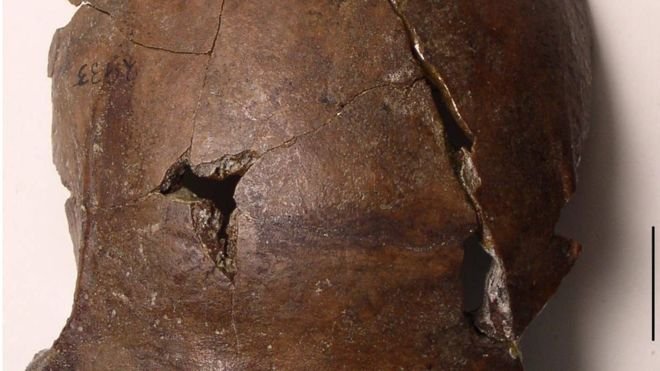 An ancient human skull discovered in Papua New Guinea is likely to have belonged to the world’s oldest-known tsunami victim, scientists say.

The skull was discovered in 1929 near the town of Aitape and originally attributed to the Homo erectus species, an ancestor of modern humans.

However, scientists now say the area was once a coastal lagoon that was hit by a tsunami about 6,000 years ago.

They believe the skull belonged to a person who died in the tsunami.

The discovery came after the international team compared sediments from the area with soil from a nearby region hit by a devastating tsunami in 1998.

“While the bones had been well studied, little attention had previously been paid to the sediments where they were unearthed,” said first author Prof James Goff, from the University of New South Wales.

The “geographical similarities” in the sediments showed that humans had experienced tsunamis in the area for thousands of years, he said.

“We conclude that this person who died there so long ago is probably the oldest-known tsunami victim in the world,” said Prof Goff.

The scientists said it was also possible that the person had died and been buried just before the tsunami happened.

The research involved studying the grain size and composition of the sediments. Among them were microscopic organisms from the ocean, similar to ones found after the 1998 tsunami which killed more than 2,000 people.

The team also performed radiocarbon dating, a method used to accurately determine the age of artefacts.

Researchers said the findings, published in the journal PLOS One, raise questions about whether other archaeological discoveries in coastal areas should be re-evaluated.

Life On Mars? What to Look for