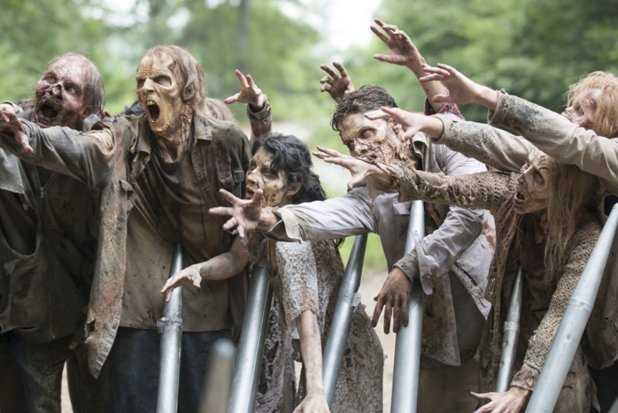 On Sunday night, The Walking Dead returned for its eighth season (and 100th episode), but viewers didn’t seem to care: the premiere averaged the lowest ratings of any season opener in five years.

According to Variety, the Season 8 premiere averaged a 5.0 rating in the key 18-49 demographic and 11.4 million total viewers. For most shows, this is nothing to sneeze at, but for The Walking Dead, this was a huge blow. The Season 7 premiere brought in an 8.4 rating and 17.03 million viewers, meaning that in just one year, viewership for AMC’s long-running zombie show has dropped approximately 40% in the demographic and 33% in total viewers.

Should AMC execs be worried? Yes and no. Clearly, a 40% dropoff in viewership is a steep number, and the Season 8 premiere is now rated third-lowest in the series’ history (it falls behind Season 1 and 2, when the show was still finding its legs). However, Variety notes that Sunday’s episode didn’t serve to clear up any cliffhangers from the previous season, whereas the Season 7 premiere resolved a large question that lingered throughout Season 6.

When compared to other popular series, The Walking Dead is still outperforming its competitors. Even with the steep drop in ratings, the series is still the number one scripted show on television in the key demographic. Sunday’s premiere bested the Season 11 premiere of The Big Bang Theory by 20% and outpaced the Season 2 premiere of NBC’s hit drama This Is Us by 25% in the 18-49 demo. Plus, the series is still a social media favorite, with fans from across the globe engaging in lively debate on Twitter during and after each episode.

All this being said, AMC shouldn’t be surprised that The Walking Dead‘s viewership numbers are dropping. Eight seasons is a long time to sustain a show, and zombies can only rise from the dead so many times before it starts to get old.

If you’re interested in the hard numbers, here’s a breakdown (via Uproxx) of the ratings for each season premiere of The Walking Dead:

Related Topics:EntertainmentThe Walking Dead
Up Next

Cat Cora sues own restaurant for not paying her, damaging reputation