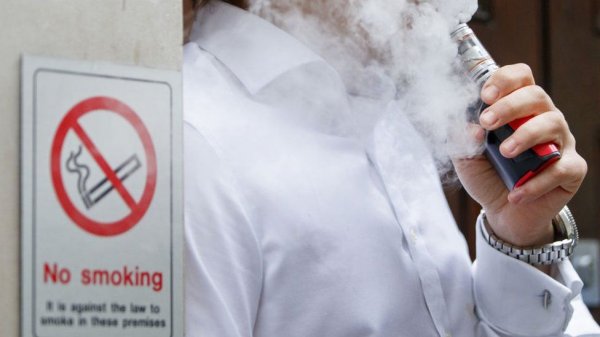 Vaping is being outlawed in indoor public spaces in the US state of New York.

A new rule, which will come into law in 30 days, will mean that the practice will be treated the same as smoking normal cigarettes.

Vaping will be banned in places including restaurants, bars and offices.

New York was one of the first states to ban cigarettes in indoor public spaces in 2003.

But this new law will have a relatively small effect.

Many areas of New York State already have a ban in place, including New York City, which has had it since 2013.

The New York Times reports that 70% of municipalities in the state had already prohibited using e-cigs in public indoor spaces.

Explaining the reason for the state-wide ban, Andrew Cuomo said: “These products are marketed as a healthier alternative to cigarettes but the reality is they also carry long-term risks to the health of users and those around them.

“This measure closes another dangerous loophole in the law, creating a stronger, healthier New York for all.”

The full health impact of vaping isn’t known, partly because it is still relatively new, so long-term effects cannot be studied.

Scientists are split on the issue. One survey from the University of Leeds suggests that e-cigarettes lead teenagers to smoke tobacco.

However, the NHS Stoptober campaign promoted vaping as a way to give up smoking for the first time this month.

A survey by the charity Action on Smoking and Health from earlier this year found there are about 2.9 million vapers in the UK, compared with nine million smokers.

Out of those people, 1.3 million use both tobacco and e-cigarettes.

Controversial chemical can linger on your toothbrush