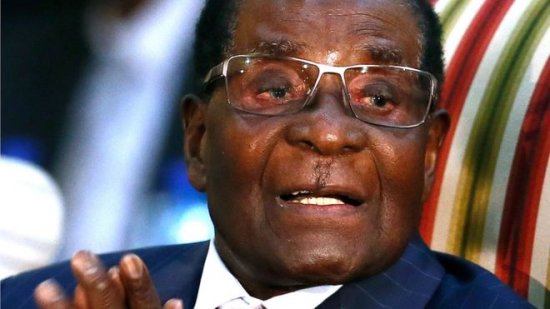 The World Health Organization (WHO) has appointed President Robert Mugabe of Zimbabwe as a “goodwill ambassador” to help tackle non-communicable diseases.

But critics say Zimbabwe’s health care system has collapsed, with the president and many of his senior ministers going abroad for treatment.

They say that staff are often unpaid and medicines are in short supply.

Dr Tedros, who is Ethiopian, is the first African to lead the WHO and replaced Margaret Chan, who stepped down from her 10-year post in June.

He was elected with a mandate to tackle perceived politicisation in the organisation.

The WHO head praised Zimbabwe as “a country that places universal health coverage and health promotion at the centre of its policies to provide health care to all”.

But US-based campaign group Human Rights Watch said it was an embarrassment to give the ambassador role to Mr Mugabe given his record on human rights.

“If you look at Zimbabwe, Mugabe’s corruption, his utter mismanagement of the economy has devastated health services there,” said executive director Kenneth Roth.

“Indeed, you know, Mugabe himself travels abroad for his health care. He’s been to Singapore three times this year already. His senior officials go to South Africa for their health care.

“When you go to Zimbabwean hospitals, they lack the most basic necessities.”

The idea of hailing Mr Mugabe “as any kind of example of positive contribution to health care is absolutely absurd”, he added.

President Mugabe heard about the award while attending a WHO conference on non-communicable diseases (NCDs) in Montevideo.

He told delegates how his country had adopted several strategies to combat the challenges presented by NCDs, which the WHO says kill about 40 million people a year and include cancers, respiratory diseases and diabetes.

“Zimbabwe has developed a national NCD policy, a palliative care policy, and has engaged United Nations agencies working in the country, to assist in the development of a cervical cancer prevention and control strategy,” Mr Mugabe was reported by the state-run Zimbabwe Herald newspaper as saying.

But the president admitted that Zimbabwe was similar to other developing countries in that it was “hamstrung by a lack of adequate resources for executing programmes aimed at reducing NCDs and other health conditions afflicting the people”.

“The Zimbabwe health delivery system is in a shambolic state, it is an insult,” spokesman Obert Gutu told AFP.

“Mugabe trashed our health delivery system. He and his family go outside of the country for treatment in Singapore after he allowed our public hospitals to collapse.”