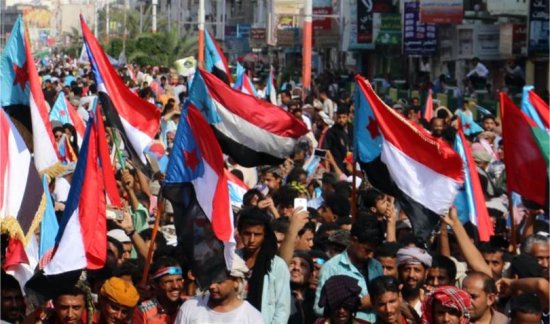 After a tumultuous marriage of more than 27 years, South Yemen appears to be edging closer to divorcing the north in a move politically and financially sponsored by the oil-rich United Arab Emirates (UAE).

In the southern coastal city of Aden, unified Yemen’s familiar flag of three horizontal bars has all but vanished, replaced by the former Communist nation’s emblem of a red star within a sky-blue chevron, while pictures of Emirati royals adorn the hallways of government buildings and ministries.

Military units once loyal to the government of President Abd-Rabbu Mansour Hadi are also distinctly absent. Instead, local militias and Yemeni soldiers are flanked by Emirati troops – tasked with guarding key installations and protecting Aidarous al-Zubaidi – the UAE’s ‘man in the south’ and leader of the southern secessionist movement.

Perceived by some as the only credible rival to Hadi, the 50-year-old militia leader set out his vision for the region on Friday saying an independence referendum would be “held soon.”

Speaking to a raucous crowd of southerners hungry for secession, he announced the formation of a new 303-member parliament, a body analysts say will be administered under his presidency.

Mansoor Saleh, a senior member of Zubaidi’s Southern Transitional Council (STC), told Al Jazeera that plans to hold a referendum were still under review, but the STC would be willing to push ahead without the approval of Yemen’s internationally recognised government.

“The only way to restore our country [south Yemen] is through liberation,” Saleh said.

“A referendum will be held on terms set by the STC. Hadi is a partner to us, just like the Arab coalition. But he has never supported the STC and is not playing any role in this process.”

Hadi’s government, which was forced by Houthi rebels to relocate to Riyadh two years ago and has made only sporadic visits to Aden, has yet to comment on the announcement. But sources close to the presidency said they were ready to thwart any effort to divide the country.

One Yemeni official told Al Jazeera that the government “didn’t feel compelled to respond to the announcement and for now, would ignore it.”

Speaking on condition of anonymity, he said: “The referendum was announced shortly after events in Spain’s Catalonia region and Kurdistan and we believe [Zubaidi’s announcement] was a reactionary move – we think it’s unlikely it’ll go ahead.”

He was later rewarded as governor of the city, but soon fell out of favour with Hadi and was dismissed along with Hani Ali bin Braik, a former minister of state, after reports emerged they were both receiving patronage from the UAE to campaign for secession.

The media reports are said to have sent Hadi into a frenzy who was still angered by a firefight at Aden’s international airport in February, when Emirati-backed forces refused to relinquish control of the facility to Hadi’s son.

Hadi later accused Abu Dhabi crown prince Mohammed Bin Zayed of behaving like an “occupying power rather than a force of liberation,” remarks which are said to have enraged Emirati officials.

Dhahi Khalfan, Dubai’s outspoken Chief of Police and Public Security, demanded Hadi’s dismissal, while Anwar Gargash, the UAE’s minister of state for foreign affairs, said in a tweet: “Among the rules of political action is that you should build trust with your allies, that you should not stab them in the back, that your decisions should be commensurate with your capabilities and that you put public interest ahead of personal ones.”

Zubaidi admitted to receiving “money and forces” from the Gulf emirate, amid claims that the UAE was seeking to seize control of the strategic Socotra island, located in the Indian ocean, and Aden port.

The UAE has confirmed carrying out military operations on Socotra, famed for its flora and fauna, with local media reporting that the UAE was leasing Socotra and the nearby Abd al-Kuri island for 99 years. Hadi’s government has refused to comment on the issue to Al Jazeera.

‘The South will never be governed by Sanaa’

Another Yemeni official told Al Jazeera that since the UAE had forked out at least $3bn on infrastructure projects in the south, and spent several billion more on equipping Yemeni forces with light and heavy weaponry, it was inevitable they would seek to enlarge their footprint in the country.

“The UAE has spent a considerable amount of money in the south and this isn’t without reason,” the official said on condition of anonymity because he was not authorised to talk to the media.

“The south will never be governed by Sanaa ever again. The UAE has spent considerable time and energy and is on the verge of splitting Yemen in two. In subsequent years, we’re going to see Abu Dhabi playing a more prominent role in our affairs.”

The UAE entered Yemen’s war in March 2015 as part of a Saudi-led Arab coalition after Shia Houthi rebels, traditionally based in the northwest of the country, seized the capital Sanaa and claimed they were the legitimate government in the country.

Triggering a protracted power struggle with Hadi, a close ally of Saudi Arabia, the Emiratis perceived the Houthis’ advance as an Iranian-orchestrated plot to destabilise the Gulf Cooperation Council (GCC).

However, the UAE’s interests in the conflict also stemmed from the security of the Bab-el-Mandab strait, one of the world’s busiest oil and gas shipping lanes.

Protecting the flow of oil and gas shipments in the Red Sea and Egypt’s Suez Canal is of vital interest for its ability to trade with Europe and North America.

In the last few years, the UAE has acquired several ports in the Middle East and Africa to secure those interests, extending its influence from Dubai’s Jebel Ali port, to Berbera in Somalia, Assab in Eritrea, and onto Limassol and Benghazi in the Mediterranean.

After 2011’s Arab spring protests swept the region and flared in Sunni-ruled Bahrain, the UAE began flexing its muscles in conflicts.

The UAE sent security forces to Bahrain, launched military strikes against rebel fighters in Libya, backed the Sisi regime in Egypt with billions of dollars after the country’s first democratically elected President, Mohamed Morsi, was ousted in 2013; and despite having a relatively small army, sent a high number of ground forces to Yemen.

In contrast, Saudi Arabia was cautious to deploy troops to Yemen, with the Saudi National Guard and Royal Saudi Land Forces (RSLF) playing a minimal role in the conflict.

In the last 18 months, the UAE’s war effort has had little effect on the military capabilities of the Houthis – who still hold the capital and continue to fire rockets and shells into Saudi territory from their northern heartlands.

In the north eastern province of Marib, the UAE has largely failed to recruit tribal fighters capable of capturing Sanaa, and have only been to push back small pockets of al-Qaeda fighters in the south.

Since April 2016, when AQAP was purged from Hadramout province’s capital Mukalla, the UAE has made slow ground against the armed group, taking a back seat on operations such as last month’s assault on Mudiyah, a village some 200km east of Aden, an area which had once been an al-Qaeda stronghold.

Maysa Shuja al-Deen, a non-resident fellow at the Sana’a Center for Strategic Studies told Al Jazeera that the Emiratis seemed disillusioned by Saudi Arabia’s plan for the country, and were exploiting southern calls for independence to oust Hadi.

“The coalition is divided and no longer knows what they want,” she said.

“The Saudis believe any talk of secession will delegitimise the war effort, which they have repeatedly claimed is about restoring the government of President Hadi. Meanwhile, the Emiratis don’t want to see any party close to Hadi and Islah (the main political party in Yemen to oppose the Houthis and seen as having links with the Muslim Brotherhood) anywhere near power.

“But through supporting Zubaidi and the secessionist movement, the Emiratis are strengthening the position of the Houthis, and their claim of being the legitimate rulers of the north.

“Ultimately, this could lead to a regional power struggle and possibly even violence, as Hadi draws his support from Abyan and Shabwa while Zubaidi draws his power from Dhale.”

While many Yemenis perceive Emirati forces of pursuing an agenda to seize strategic regions and ports, others, however, blamed Hadi for the rising of secession movement, accusing him of failing to properly administer the south.

Despite Hadi hailing from the south himself, Abyan province, he has repeatedly demonstrated weakness in office since assuming president and during the 18 years he served as vice president under Ali Abdullah Saleh, he said.

“The people are suffering due to Hadi’s mismanagement. He’s repeatedly failed to provide essential services such as water, electricity and fuel, and despite repeated calls to stop,” Murad Abdu, a south Yemen youth activist, told Al Jazeera.

Since the UAE intervened in Yemen, Islah, the only political party to oppose the rise of the Houthis, has tried to distance itself from the Muslim Brotherhood movement in an effort to ease Abu Dhabi’s anxiety about its Islamist ideology.

For more than two decades, the UAE has clamped down on Muslim Brotherhood affiliates, jailing dozens of activists in the Emirates on trumped-up charges including Sultan bin Kayed al-Qasimi, a member of the Ras al-Khaimah Emirates’ ruling family, and pursuing the same aggressive policy abroad.

The UAE has operated a network of ‘black sites’ in south Yemen, where hundreds of men have been kidnapped by local militias backed by the UAE, with local media reports claiming some of those apprehended were members of Islah.

Islah’s rejection of secession and desire to keep the Arabian Peninsula state intact has made it a target for security forces, who have arrested several of its members and raided its offices in Aden.

Summer Ahmed, a writer and south Yemen activist, told Al Jazeera that even before the bombs started raining on the south, many southerners were already tired of the political set-up.

“The south is in turmoil. Its institutions and infrastructure were destroyed during the invasion by the Houthis and their allies loyal to Saleh in 2015.

“And as Hadi continues to send the wrong message to southerners … it’s our right to disengage from this unity that’s brought us only war, death, and destruction.”