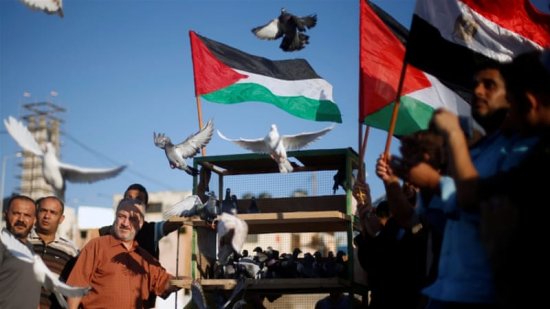 Fatah and Hamas have vowed to press ahead with the implementation of a national unity deal, in response to a US official demanding the disarming of Hamas.

The two dominant parties in Palestinian politics signed a unity deal in Cairo last week, in an effort to end a decade of divide between them.

Jason Greenblatt, the US president’s special representative for international negotiations, on Thursday said Hamas must disarm if it wants any role in a unity government, in the first detailed US response to the deal.

The movement said in a statement that the US official’s remarks represented blatant interference in internal Palestinian affairs and were aimed at sabotaging the Palestinian group’s reconciliation process.

Fatah spokesman Osama Qawasmeh told Al Jazeera that the agreement is an “internal Palestinian matter” that will help bring peace.

“The deal that we signed with Hamas talks about building a Palestinian state on the June 4, 1967 borders – which is in line with international law,” Qawasmeh said when asked about Greenblatt’s comments.

Earlier in the day, in a statement echoing Israel’s position, Greenblatt had said “any Palestinian government must unambiguously and explicitly commit to nonviolence, recognise the state of Israel, accept previous agreements and obligations between the parties – including to disarm terrorists – and commit to peaceful negotiations.

“If Hamas is to play any role in a Palestinian government, it must accept these basic requirements,” he added, referring to the Middle East Quartet’s requirements.

The quartet, which comprises the United Nations, the United States, the European Union and Russia, was established in 2002 to aid the peace process.

While the Palestinian Authority has accepted the key principles outlined by the quartet, Hamas views the demands as conflicting with its position of using armed resistance to end Israeli occupation.

“I think we should clarify our position to the Americans that the unity deal will help the political process and will help bring peace,” Fatah’s Qawasmeh said.

“Israel is trying through its allies to pressure the Palestinian leadership. We declare that our decision is a Palestinian, independent, national decision and we will not go back to division,” he added.

Hamas has been the de-facto ruler in the Gaza Strip since 2007 after the party defeated Palestinian Authority President Mahmoud Abbas’ long-dominant Fatah party in parliamentary elections.

When Fatah refused to recognise the vote, Hamas took control of the Gaza Strip in an armed conflict, after which Israel imposed an airtight siege on the territory.

The two groups have governed the occupied Palestinian territories of the West Bank and the Gaza Strip respectively ever since.

On Tuesday, Israeli Prime Minister Benjamin Netanyahu said his government would refuse any diplomatic talks with the unity government if Hamas had any role in it.

“Following previous decisions, the Israeli government will not hold political talks with a Palestinian government that is supported by Hamas, a terror organisation calling for the destruction of Israel,” the statement read.

A previous statement made on his Facebook on October 12 said: “Say yes to peace and no to joining hands with Hamas […] reconciliation between Fatah and Hamas makes peace much harder to achieve”.

The so-called peace process has been stalled for decades, despite international initiatives to forge an agreement, with issues such as the status of Jerusalem, the fate of more than five million Palestinian refugees, and settlements blocking any progress.

US President Donald Trump has said he aims to broker a peace deal but no substantive developments have been made so far.

Israel and the Palestinian Liberation Organization (PLO) signed the Oslo Accords in 1993.

The agreement led to the creation of the Palestinian Authority, an interim self-governing body meant to lead to an independent Palestinian State on the territories of East Jerusalem, the West Bank and the Gaza Strip, which Israel occupied in 1967.

But since then, Israel’s settlement project in the occupied territories, which started in 1967, has accelerated, blocking any chance of an independent Palestinian state.

The number of Israelis that were transferred to live in the occupied West Bank rose from 111,000 to 750,000 since the accords were signed, according to Palestinian statistics.