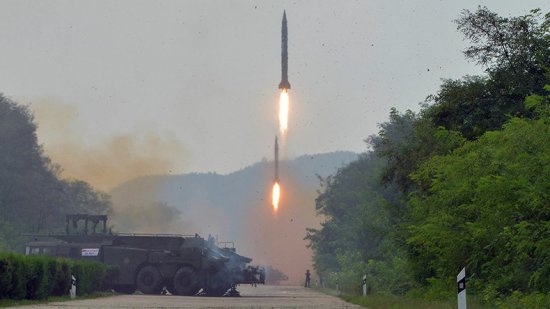 405Views
North Korea’s deputy UN ambassador has warned the UN General Assembly that the crisis on the Korean Peninsula “has reached the touch-and-go point and a nuclear war may break out any moment.”

Kim In-ryong said North Korea is the only country in the world subjected to “such an extreme and direct nuclear threat” by the US, AP reports.

He accused Washington of hatching a “secret operation aimed at the removal of our supreme leadership” and defended his country’s nuclear arsenal, at the heart of the crisis, as being for self-defense.

Speaking to the UN General Assembly’s disarmament committee, he insisted that nukes are Pyongyang’s “precious strategic asset that cannot be reversed or bartered for anything,” a line that other North Korean officials have voiced almost word-for-word before.

Also in line with the North’s previous rhetoric, he warned that “the entire US mainland is within our firing range and if the US dares to invade our sacred territory even an inch it will not escape our severe punishment in any part of the globe.”

At the same time Kim claimed that “the DPRK consistently supports the total elimination of nuclear weapons and the efforts for denuclearization of the entire world.” But not before the US renounces its nuclear arsenal.

“Unless the hostile policy and the nuclear threat of the US is thoroughly eradicated, we will never put our nuclear weapons and ballistic rockets on the negotiating table under any circumstances,” he said.

Despite round upon round of international economic sanctions, North Korea has been winding up its nuclear and ballistic missile programs with regular test blasts and launches.

The EU also adopted a new range of sanctions to punish Pyongyang for its “continued and accelerated nuclear- and ballistic-missile programs.”

The US, meanwhile, has kicked off five-day naval exercises together with South Korea, in the waters surrounding the Korean Peninsula. Pyongyang has denounced the drills as provocative, and recently renewed its threats of a missile strike at the US Territory of Guam.

Washington and Pyongyang have been trading threats and verbal blows for months now, some of the most recent including US President Trump calling the North Korean leader Kim Jong-un a “rocket man…on a suicide mission” and receiving the label of “mentally-deranged US dotard” in return.