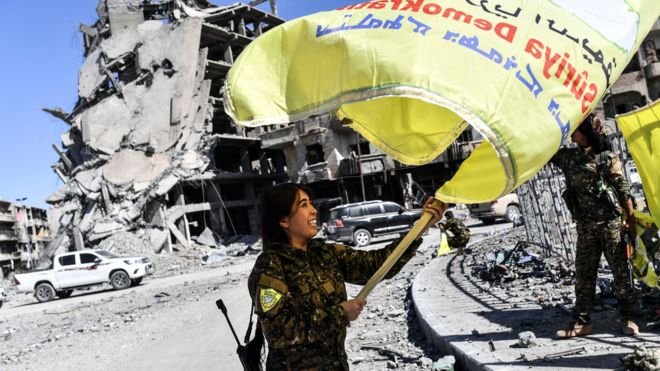 A US-backed alliance of Syrian Kurdish and Arab fighters says it has taken full control of so-called Islamic State’s one-time “capital” of Raqqa.

Syrian Democratic Forces (SDF) spokesman Talal Sello said the fighting was over after a four-month assault.

Clearing operations were now under way to uncover any jihadist sleeper cells and remove landmines, he added.

A formal declaration of the city’s “liberation” and the end of three years of IS rule is expected to be made soon.

Earlier on Tuesday, the SDF cleared the last two major IS positions in Raqqa – the municipal stadium and the National Hospital.

Reuters news agency reported that fighters raised the flag of Popular Protection Units, a Kurdish militia that dominates the SDF, inside the stadium and celebrated in the streets and chanted slogans from their vehicles.

Dozens of foreign militants were believed to have made their last stand in the stadium, while 22 were reportedly killed in the final attack on the hospital.

Up to 300 militants were thought to be holding out on Sunday, after Syrian jihadists and their families were evacuated under a deal negotiated by tribal elders.

“Everything is finished in Raqqa, our forces have taken full control of Raqqa,” Mr Sello told AFP news agency on Tuesday afternoon.

“The military operations in Raqqa have finished, but there are clearing operations now under way to uncover any sleeper cells there might be and remove mines.”

IS seized Raqqa in early 2014, months after it became the first Syrian provincial capital to fall to the rebels in the civil war, and made it the headquarters of its self-styled “caliphate”.

Raqqa was transformed by the group, which implemented an extreme interpretation of Islamic law and used beheadings, crucifixions and torture to terrorise residents who opposed its rule.

At the same time, Raqqa became home to thousands of jihadists from around the world who heeded a call to migrate there by IS leader Abu Bakr al-Baghdadi.

About 15,000 SDF fighters, supported by US-led coalition air strikes and special forces on the ground, began an operation to capture Raqqa last November.

They encircled the city before breaching IS defences on the outskirts in June.