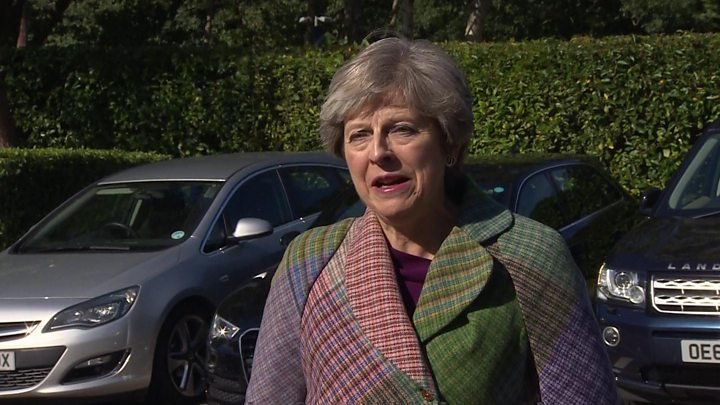 Theresa May has said she has the “full support of her cabinet” after a former party chairman said there should be a leadership contest.

Grant Shapps says about 30 Tory MPs, including five ex-cabinet ministers, back his call for a leadership contest.

There has been leadership speculation since Mrs May’s decision to call a snap general election backfired and the Conservatives lost their majority.

The Conservative conference this week was meant to be a chance to assert her authority over the party but her big speech was plagued by a series of mishaps, as she struggled with a persistent cough, was interrupted by a prankster and some of the letters fell off the conference stage backdrop behind her.

Asked about leadership speculation as she attended a charity event in her constituency, Mrs May said: “What the country needs is calm leadership and that’s what I am providing with the full support of my cabinet.”

She said her recent speech in Florence had given “real momentum” to Brexit negotiations and she was intending to update MPs next week on her plans to help “ordinary working families” with a cap on energy bills.

Environment Secretary Michael Gove was among cabinet ministers and MPs publicly defending her on Friday morning, as the story broke that Mr Shapps was the senior Tory behind a bid to persuade Mrs May to go.

Mr Gove told BBC Radio 4 the prime minister was a “fantastic” leader, had widespread support, and should stay “as long as she wants”. He said that the “overwhelming majority of MPs and the entirety of the cabinet” backed the prime minister.

Home Secretary Amber Rudd has written an article in the Telegraph urging the prime minister to stay, while First Secretary of State Damian Green said on the BBC’s Question Time the prime minister “was determined as ever to get on with her job – she sees it as her duty to do so”.

A total of 48 Conservative MPs – 15% of the parliamentary party – would need to write to the chairman of the 1922 committee of backbench Tories in order to trigger a vote of confidence in the leader. A contest would only be triggered if Theresa May lost that vote, or chose to quit.

There is, this morning, an operation being mounted by the government to try to show that nothing has changed in the Conservative Party in the last few days.

That Theresa May’s leadership remains on track and she is, to use another of her famous phrases, just, “getting on with the job”.

Except, as happened the last time she proclaimed “nothing has changed”, something rather fundamental has, after all.

For the doubts that have been building about her in the party for months are now out there in the wide open.