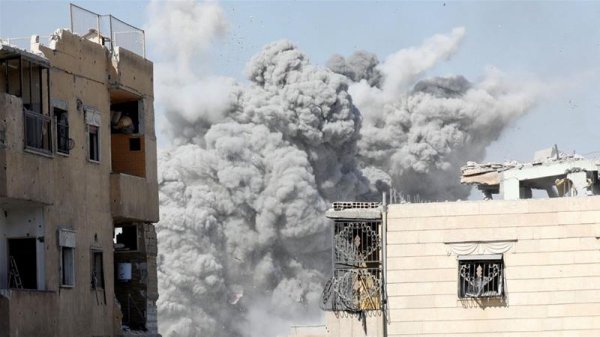 The worst fighting since the battle for eastern Aleppo last year is raging in several regions of Syria, causing hundreds of civilian casualties, the International Committee of the Red Cross (ICRC) has said.

Up to 10 hospitals have been reportedly damaged in the past 10 days, cutting off hundreds of thousands of people from access to health care, the aid agency said in a statement on Thursday, voicing alarm at the situation from Raqqa to Idlib and eastern Ghouta.

“For the past two weeks, we have seen an increasingly worrying spike in military operations that correlates with high levels of civilian casualties,” Marianne Gasser, head of the ICRC’s delegation in Syria, said.

“My colleagues report harrowing stories, like a family of 13 who fled Deir Az Zor only to lose 10 of its members to air strikes and explosive devices along the way.”

ICRC reported that some camps around Raqqa and Deir Az Zor are receiving more than 1,000 people, including many women and children, every day, adding that humanitarian organisations are struggling to provide water, food and basic hygiene to the new arrivals.

“Military operations must not disregard the fate of civilians and of the vital infrastructure on which their survival depends,” Robert Mardini, ICRC’s regional director for the Near and Middle East, said.

“Winning by any means is not only unlawful, but also unacceptable when it comes at such human cost. We call once again on all those fighting in Syria to show restraint, and to abide by the basic tenets of International humanitarian law.”

The Syrian Observatory for Human Rights, a UK-based monitoring group, recorded the killing of 185 people, including 45 children and 46 women between September 29 and October 4 in several attacks, which it attributed to both the Russian and Syrian governments.

In response, the Syrian opposition condemned in a statement on Wednesday the “horrific massacre against those fleeing in the suburbs of Deir Az Zor”.

“The warplanes of the Russian occupation committed a monstrous massacre near al-Ashira city south of Deir Az Zor, which led to the killing of no less than 50 civilians, mostly women and children”.

“The targeting of civilians fleeing the fighting occurred while they were crossing the Euphrates river… when the Russian warplanes directly shelled them, and in broad daylight…” adding that tens of thousands of Syrians are under siege and are being targeted by both the Syrian and Russian armies.

The Syrian army, under President Bashar al-Assad, launched an offensive recently to gain control over Deir Az Zor, one of the cities on the Euphrates, which was mostly held by the Islamic State of Iraq and the Levant (ISIL, also known as ISIS) since 2014.

Aided by the Russian military and Iran-backed fighters, the Syrian government managed to lift the siege after three years.

But despite the signing of an agreement to secure “safe zones” for civilians escaping the fighting, casualties and attacks on lifesaving facilities have continued to mount.

Last week, the New York-based Physicians for Human Rights (PHR) condemned Russia and the Syrian government for “the worst string of attacks” on hospitals in Syria in Idlib, northwest of Deir Az Zor.

“What that tells us is that this looks like a strategy to punish the civilian population and take out the hospitals so that healthcare is impossible,” Marianne Mollman, PHR’s director of research and investigations, told Al Jazeera.