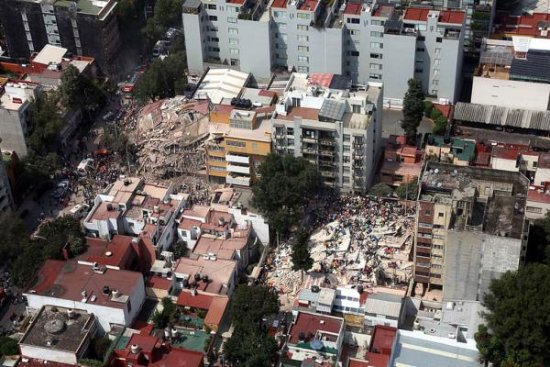 Seismologists were caught off-guard by back-to-back earthquakes that shook Mexico earlier this month. But then again, they weren’t.

While decades of research has helped scientists better understand how earthquakes behave, they are still not able to predict them.

“My view is that we’re not at all close to being able to predict earthquakes,” Jeanne Hardebeck, a research geophysicist at the U.S. Geological Survey’s Earthquake Science Center in Menlo Park, Calif., told UPI. “There has been a lot of work over the years looking for predictive precursory signals, which has failed to find a signal that is a reliable predictor of a coming earthquake.”

Peggy Hellweg, director of operations at the University of California’s Berkeley Seismological Laboratory, agrees that true earthquake prediction is beyond the scope of science.

“We do not yet have the equipment — or even know what is needed — to know all the parameters in the earth that affect when, where and how big an earthquake will be,” Hellweg told UPI.

Seismologists in Mexico have been focused on the dangers posed by the Guerrero Gap, a section of fault line along the Pacific coast near the resort town of Acapulco. It hasn’t had a significant event for more than 100 years.

It was not to blame for the Sept. 7 magnitude-8.2 quake that struck the coast of Chiapas, Mexico’s southernmost state, killing 98 people; or the 7.2 quake two weeks later that rattled Mexico City, killing at least 230.

Those rumblers were triggered by a rupture deep beneath the mountains of central Mexico.

A fault slip near Guerrero Gap triggered the 1985 earthquake that toppled skyscrapers and killed some 10,000 people in Mexico City. Because the Guerrero Gap hadn’t broken in decades, seismologists assumed it was only a matter of time.

In Japan, scientists worried that a slip along the Tokai Gap could destroy Tokyo, but in 2011, a separate less-studied fault triggered the Tohoku earthquake that inspired a massive tsunami and killed 15,894 people.

“California realized this in the devastating 1994 magnitude-6.7 Northridge earthquake,” Meier told UPI. “Before that, people were focused mainly on the very big earthquakes that can occur on the San Andreas Fault, but then in 1994 a much smaller — but still pretty big — earthquake happened right underneath LA and caused what was then the worst natural disaster in the history of the U.S.

“Today, I think there is a broad realization that in most seismically active areas destructive earthquakes can occur almost anywhere,” Meier added. “In California about half the earthquakes that caused damage occurred on faults that were previously unknown.”

Seismologists are still working to understand the physics of earthquakes.

“We can’t observe earthquake processes directly because they occur deep within the earth,” Hardebeck said. “If we knew the relevant physics and could better observe the system, then physics-based earthquake forecasting — similar to weather modeling — might be possible.”

Some scientists are using machine learning algorithms to analyze seismic data, and to find important fault slip signatures among the statistical noise.

“So far, all proposed precursory signals have not been confirmed to work in even 50 percent of the cases,” Hellweg said. “Or, they may occur all the time and only in a few cases does a big quake follow.”

“We have made progress on Earthquake Early Warning, alerting people quickly when an earthquake happens, which may give them seconds or even minutes to get ready before the shaking reaches their location,” Hardebeck said, referring to a warning system used by Japan. “This is how the earthquake alarms in Mexico City work. A similar system is being developed for the U.S. West Coast.”

By studying how seismic waves travel through different types of rock and what frequencies at-risk acreage is most likely to vibrate at, seismologists can help city officials and engineers develop improved building codes.

Still, some countries situated along the Ring of Fire, a Pacific basin region of heightened seismic activity, can’t afford to update infrastructure. And new types of temblors can take cities by surprise.

With more data, researchers might begin to develop more accurate forecast models. Weather forecasting has improved dramatically over the last several decades. Most of the improvements can be explained by the increase in accurate weather-related data scientists now have — data on cloud cover, temperature, wind, air pressure and more.

The mechanics of fault lines occur in three dimensions across vast distances and over huge swaths of time. The efforts to record and measure these mechanics are growing in scope, but they are capturing only a small percentage of the data that’s out there.

“We are using seismic waves from a variety of sources to get some very, very ‘big picture’ estimates of what is happening in the earth,” Hellweg said. “Because of the sparse nature of those measurements, we need to average over long times. Ideally, we would have sensors ‘everywhere,’ measuring ‘everything’ — ‘all the time.’ We don’t yet know what ‘everything’ is or what time scales are important.”

Until then, the best scientists can do is use statistical and historical analysis to offer a rough estimate for where, when and how powerful the next quake will be.

Hellweg has a canned response for those who ask her when the next big one will come from the Hayward Fault Zone, which runs through the east side of the San Francisco Bay.

“It can happen with high likelihood anytime in the next 30 years,” she tells them. “Do I expect it to happen tomorrow? No. Would I be surprised if it happened tomorrow? No.”

Life On Mars? What to Look for